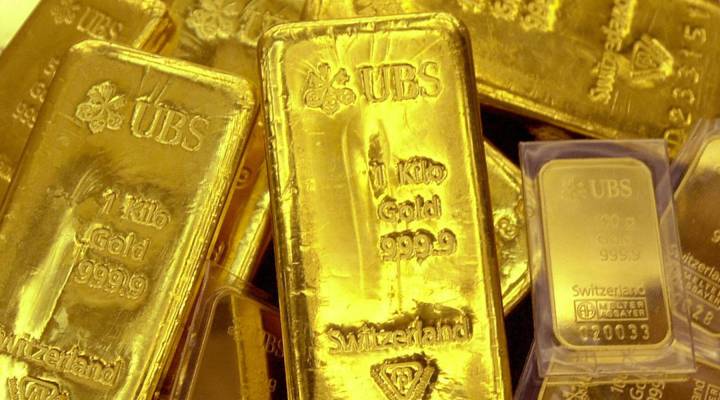 COPY
Investors have rushed to buy gold in the wake of Brexit. JUNG YEON-JE/AFP/Getty Images
Brexit

Investors have rushed to buy gold in the wake of Brexit. JUNG YEON-JE/AFP/Getty Images
Listen Now

Gold was produced by the collision of dying stars around 13 and a half billion years ago. It’s rare on earth and it’s rare in the rest of the universe. Civilizations come and go, but gold will always be valuable.

“Gold is maintenance of purchasing power for the last 5,000 years,” said George Gero, managing director of RBC Wealth Management. Buying gold is about avoiding uncertainty, whether that be from inflation, deflation, currency risk, or economic catastrophe.

There has been plenty to go around this year – from fears of growth in China to most recently post-Brexit vote concerns over the pound, the Euro, the Eurozone, and the global economy generally. “Gold is the type of insurance you hope you never need,” said Gero.

But one thing gold is not, is magic.

“There’s a cost of gold which is it doesn’t do anything for you,” said Katrina Lamb, head of investment strategy and research at MV Financial.   Gold doesn’t pay dividends, it doesn’t have a yield, it just … is.

“There’s a perception that gold is safe,” said Lamb. “Gold bars, cash under your mattress something that lets you sleep better at night. But the reality is it’s just a commodity that goes up and down like everything else.”

In fact it goes up and down a lot based on the politics and fears of the day, it’s incredibly volatile and has become increasingly so over the past two decades. “Investors have been burned by that,” said Lamb.

“Typically what happens with gold is it’s taxed as a collectible which means it’s taxed higher than say long-term capital-gains rate,” said Eric Parnell founder of Gerring Capital Partners. The maximum tax rate for collectibles, said Parnell, is 28 percent, though he said there are some ETFs that manage to offer exposure to gold with lower tax rates.

So why, with all this downside, do we still see people pushing up the price of gold?  Because a lot of the alternatives look pretty sad.

“The government bond market globally, which has also been a source of liquidity and safety, is not offering an attractive yield right now,” said Chris Berry, founder of House Mountain Partners. In Germany and Japan, interest rates are actually negative. “You’re actually paying the government to hold your money, there’s no yield, no return,” said Berry.

So, people have been looking to gold. But, advisors say, don’t put all your eggs in one basket – even a golden one.