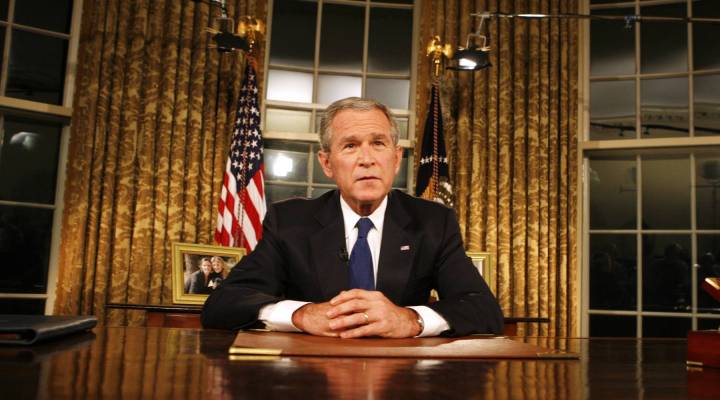 As we start the stretch run to the political conventions later this month — July the 18th in Cleveland for the GOP and the 25th for the Dems in Philadelphia) we take a look back at the economic legacy of our most recent ex-President:  George W. Bush.  He’s the subject of a new biography, titled “Bush,” written by Jean Edward Smith.

On the economic environment when Bush took office:

The budget had been balanced for the last three and a half years. His father had raised taxes, and Bush campaigned on the idea that this was the people’s money and would be returned to them in a tax cut. Bush’s first activity as president was to push a tax cut through Congress. When Paul McNeil, the Secretary of the Treasury, and Alan Greenspan, the head of the Federal Reserve, wanted to put a trigger in it so in case the surplus disappeared the tax cut would disappear as well. Bush would have none of that. So Bush signed the tax cut into law in June, and in July, the budget ceased to be balanced, and the surplus went out of sight.

On Bush’s handling of the 2008 financial crisis:

When the crisis hit in 20o8 he turned to Hank Paulson, who was the Secretary of the Treasury, and Ben Bernanke at the Federal Reserve, and unlike his conduct in foreign relations, he listened to them. He objected personally to everything he was doing, I think. But he realized it was necessary to do and so he followed their advice, and did very well in minimizing the draw down in 2008. I think by 2008 he realized he made mistakes, I think he was much more modest as a president. He lost his majority in Congress in the 2006 elections. The war in Iraq was a mess. He also realized that Paulson and Bernanke knew much more about what they were talking about than his White House staff did.

I don’t think he’s the worst president. I mean Herbert Hoover probably has a lock on that. Bush’s behavior as an ex-president has really been exemplary. He has not commented on anything of a political nature. He has not criticized Obama, he’s stayed totally out of public life, and I think that as a result of that his reputation will improve. Certainly some of his domestic accomplishments will stand the test of time. Prescription drugs for seniors, No Child Left Behind, those are all extraordinary achievements.