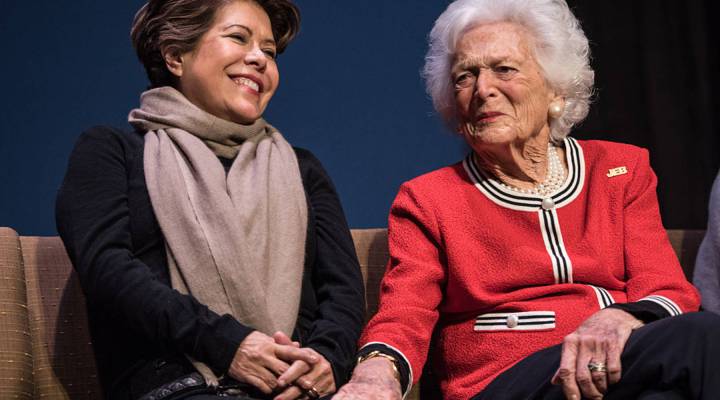 Former first lady Barbara Bush died today at home in Houston, Texas, according to a statement from her family. She was 92. Over the weekend, the wife of former President George H.W. Bush elected to forgo additional treatment for several health problems.

With her husband, Bush presided over a political powerhouse that includes two presidents, a governor and a senator. Barbara Bush served as first lady from 1989 to 1993, but she remained in the news during the various campaigns of her sons, and more recently in a written endorsement for Besty DeVos, President-elect Donald Trump’s pick for Secretary of Education.

During her time at the White House, Bush established herself as champion of literacy, encouraging reading and writing among Americans. In 1989, she founded the Barbara Bush Foundation for Family Literacy. The foundation started a new children’s program, “My Home Library,” last year, but has campaigned to increase the literacy rate of adults as well.

“Despite our knowledge that a mother’s educational level is the No.1  determinant of a child’s likelihood to graduate from high school, we’re going backwards,” reads a blog post from the foundation. “Enrollment in adult literacy and English Language Learning programs has declined by 27 percent since 2001. The recession steamrolled dreams: in Los Angeles alone there was a decline of over 800,000 students served from 2008 to 2013, and local adult literacy waiting lists are in the thousands.”

There are 36 million “low-literate” adults in the U.S., according to the nonprofit, which is behind the $7 million Barbara Bush Foundation Adult Literacy XPRIZE. The 18-month challenge, done in partnership with the Dollar General Literacy Foundation, asks teams to create literacy apps for adults.

Barbara Bush used her 90th birthday to launch the award in 2015, telling the Associated Press that she hoped the competition would result in “a radical breakthrough.”

“A parent’s literacy level is a significant predictor of their child’s future educational success, influencing generations to follow,” she said in a statement at the time.