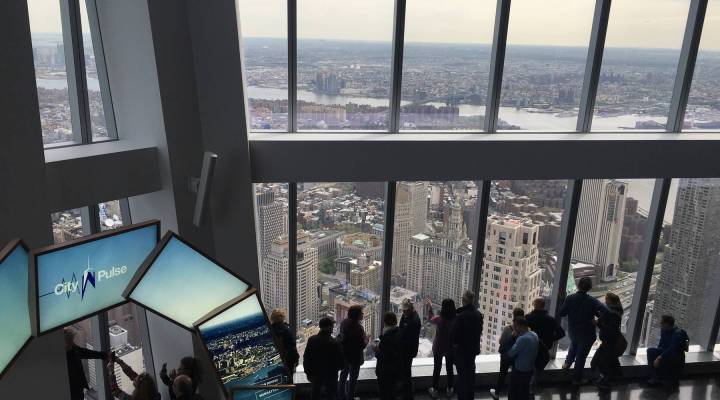 Exterior view of the new tower.

Author and architecture writer Judith Dupré says the new World Trade Center, “represents one of the most complex collaborations in human history.”

It’s the tallest building in the Western Hemisphere. More than 25,000 workers — and over $15 billion – helped re-construct the site.

Dupré has been writing about the World Trade Center since the early 1990s. The following are excerpts from our interview with her.

After September 11, many thought the skyscraper was dead:

There’s a lot of people here, most visited place in the country, but it’s also a place where many people are not quite ready to return. But as far as skyscraper construction goes, more skyscrapers have been built since 2001 than in the entire century preceding it. So we are absolutely in the midst of a skyscraper boom.

The Marketplace crew walks with Dupre at the World Trade Center.

Many people had opinions during re-construction:

I think what is important to remember is that my book is the very first history of this new project.  There will be other histories that come. My job as the official biographer of this new site was to present a very balanced view of all the forces that were at work here – and it was a tangled group of forces. Something like 85 agencies [and] organizations had a legitimate claim to make to this site. Everyone had a right to speak and that includes a fair swath of the 8 million people who call New York home – and they did, many did. And everything was considered. This is a place of democracy, and I see it, I see people visiting and working and sitting in the sun and I saw a lady changing her baby’s diaper on one of the granite benches the other day and I thought you know what? Yeah. This is what exactly was hoped for.

On why cities need buildings like the One World Trade Center:

Everything cannot be utilitarian. Much has been made of the delays and the cost down here, there were lots of practical reasons for that, but these designs gave a little bit more. We don’t want to have cities that are totally utilitarian. This tower stands as proof, despite all the troubles and evil in the world, it is proof of what human beings are capable of. And when you see this building coming down the west side, coming down the east side, you know, from Brooklyn, from Queens, from Staten Island, you think, ‘wow.’ This is what human beings are capable of – and it nobles all of us.