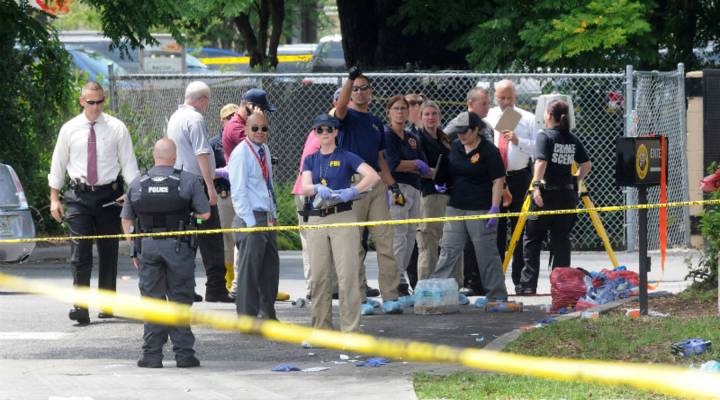 COPY
FBI agents are seen outside of Pulse nightclub, the spot of the nation's deadliest mass shooting in modern history. Nearly 50 people are reported dead and at least that many more are injured. Gerardo Mora/Getty Images

FBI agents are seen outside of Pulse nightclub, the spot of the nation's deadliest mass shooting in modern history. Nearly 50 people are reported dead and at least that many more are injured. Gerardo Mora/Getty Images
Listen Now

A gunman at a gay nightclub in Orlando, Florida killed nearly 50 people Sunday and injured at least as many more. The gunman, 29-year-old Omar Mateen, was wielding a handgun and a style of semi-automatic rifle called the AR-15, a weapon that has now been used in several mass shootings.

The AR in AR-15 stands for ArmaLite Rifle, named after the company that developed it in the 50s — originally for military use. Later, a civilian variant was designed.

AR-15 style rifles are capable of firing many rounds of ammunition in a short time. But most versions are semi-automatic, so you have to pull the trigger each time.

It’s the most popular style of rifle in the country, used for different types of hunting as well as for target shooting.

However, an association is building between AR-15 style rifles and mass shootings, given their use in episodes like the one in San Bernardino, California last December, where 14 county workers were killed at a holiday party, and at Sandy Hook Elementary School in Newtown, Connecticut, where 20 first graders and six staffers were killed in December 2012.

Families of children at Sandy Hook filed a lawsuit against Remington, one of the makers of AR-15 style rifles, saying the weapon shouldn’t be sold to civilians. The case goes to trial in April 2018.