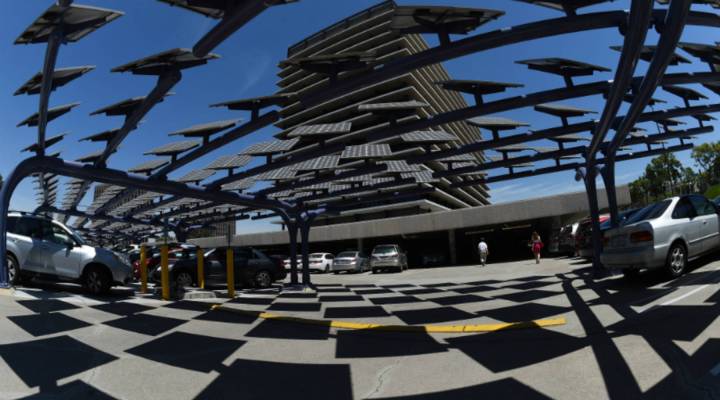 It’s just after lunchtime on the trading floor of Arizona Public Service (APS) in downtown Phoenix, and three guys are parked in front of screens, watching the ever-fluctuating price of power. They are chasing deals, not so much here in Arizona, but in California.

“That’s very typically what happens every day during this time of year,” said Brad Albert, who is in charge of resource management for APS, the state’s largest utility.

It’s a mild, sunny spring day in California. Customer demand is low, but solar panels are churning out lots of power. So much, in fact, that California has a surplus at the moment.

As a result, prices have gone negative, and the Arizona utility is actually being paid to take some of that power from its next-door neighbor.

This dynamic is “very much driven by the large amounts of renewable generation, particularly solar in California,” Albert said.

No state has embraced solar energy quite like the golden state, which is the leading market in the country.

“[California is] going to keep putting more renewable energy source in,” Albert said, and that will “make this problem even worse as the next couple of years go on.”

But not everyone sees this oversupply of energy as a problem.

“We think of this as, actually, a real indication of how far solar has come in terms of price and availability,” said Jim Baak, with the nonprofit Vote Solar. He calls this negative pricing the “growing pains” of an electrical grid in many ways still stuck in the last century.

“We see this as new technologies and renewable clean sources that have become very, very cost effective being put onto a grid that was designed under a very different structure,” Baak said.

Back then, utilities could more easily manage power plants to match demand. But nowadays, solar power floods the grid even when demand is low. The utilities need to adapt to this new reality, Baak said.

Mark Rothleder with the California Independent System Operator (CAISO) agrees. At the moment, the surplus of energy is still “manageable,” he said, but they are developing solutions since this is only the beginning stage.

For example, Rothleder said California can take advantage of “regional opportunities to exchange and share this energy when it’s mutually beneficial for other parts of the system.”

In other words, trading energy with nearby states when they need it.

“I am going to generate from my solar and either charge my electric vehicle or charge a battery, and then I can actually sell that back to the utility when the utility needs it most,” he said.

Like when people come home at the end of the day – when the sun isn’t shining.