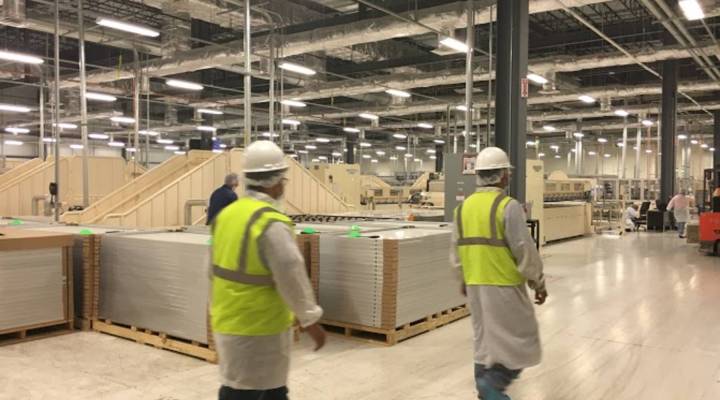 Eighty thousand workers have been laid off across the country as the price of oil has plummeted. In Texas, some out-of-work rig hands, pipe fitters and engineers are finding employment in solar energy.

David Webster has been managing the Mission Solar warehouse in San Antonio since February. Before finding work in the solar sector, Webster spent 10 years shipping oil out of rigs all over the world. Now, he makes sure that the solar panels are packaged and distributed to customers across the U.S.

Transitioning to solar energy was an adjustment.

“Learning about the different types of [panels], learning how the whole process works, that was a learning curve,” Webster said. “The warehouse portion and the management people, not so much.”

Something else that’s different about his new job — the money. “Over a year’s period of time, it’s about half,” Webster said.

Mariela Cruz, a hiring manager at OCI Power, said that a 50 percent pay cut is pretty typical for people transitioning from oil and gas to solar energy.

“Not to say that we don’t pay well or anything like that, but definitely we know that there is a pay differential for those employees,” Cruz said.

An entry level job in solar pays about $50,000 a year. At the peak of the oil boom, rig hands could be making six figures. But warehouse manager David Webster said it was a hard life. Spending 28 days on the rig and 28 days off took a toll on him. The recent uncertainty in the oil market convinced him to take a pay cut.

“The stress of not knowing if you were going to get laid off, that was worse,” Webster said. “I don’t have any stress here.”

David Webster has been managing this solar module warehouse in San Antonio since February. He previously managed shipments of oil rigs all over the world.

The recent downturn in the oil market has made solar energy jobs more attractive. When Mariela Cruz posts an opening for a solar technician, for example, she gets about 100 candidates, of which 25 percent come from oil and gas. Her challenge is to weed out those who will leave once oil prices go up again.

“You can generally tell that they’re trying to make a different transition, that they maybe are tired of the ups and the downs,” Cruz said. But she says some people are less genuine.  “There are some that will actually candidly tell you, well, I’m only looking for something until the market changes, and you’re like okay, thank you.”

The Solar Foundation says Texas will add 900 solar jobs this year. That’s about one percent of the people who recently got pink slips in oil and gas. John Tintera is with the Texas Alliance of Energy Producers. He says there’s no way this new industry can absorb all of those displaced workers.

“We’re simply not seeing solar having that level of employment,” Tintera said. “If solar continues to grow then I think at least a 20 percent coverage would be something that would not surprise me if I saw that figure in the future.”

But for now, hiring manager Mariela Cruz says getting a job in solar energy is more competitive than ever. She has one bit of advice for oil and gas workers wanting to make the transition: don’t pretend to be a tree hugger and all about renewable energy after a whole career on oilfields.

“After you’ve done [oil and gas] for 20 years it’s kind of hard to say,” Cruz said. “Can I really take that with a grain of salt or not?”

Cruz hopes that the people she hired this year will stay on board, even when oil prices go back up.