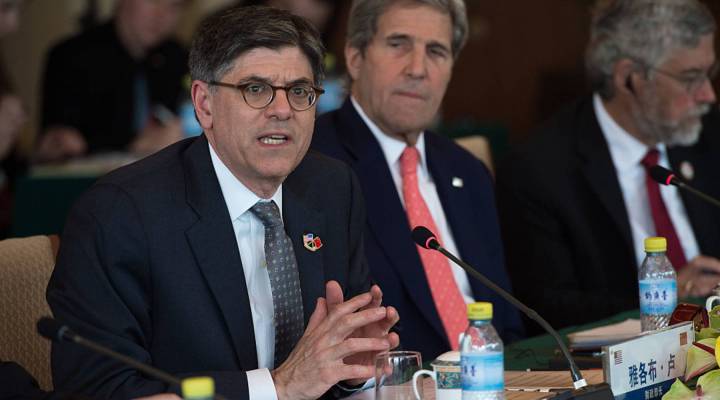 Secretary of State John Kerry and Treasury Secretary Jack Lew are in China this week, participating in the annual Strategic and Economic Dialogue between the U.S. and China.

Lots of issues are being discussed including opening China to more financial products and drama over control of parts of the South China Sea.

But also pretty high up on the agenda … steel. China is producing so much steel — and selling it so cheaply — that other countries are getting pretty upset, claiming China is flooding the market.

“Excess capacity has a distorting and damaging effect on global markets,” said  U.S. Treasury Secretary Jack Lew at the opening of the dialogue, “and implementing policies to substantially reduce production in a range of sectors suffering from overcapacity, including steel and aluminum, is critical to the function and stability of international markets.”

The cheap Chinese steel is undercutting prices in the U.S. and Europe, where manufacturing is already struggling.

“I would argue it’s the most important economic issue between China and the U.S. this year,” said David Dollar, a senior fellow at the China Center at the Brookings Institution.

“The U.S. would like to see China move more quickly to close some of this capacity, recognize that it’s never going to have a market.”

With so many people employed in the steel sector, however, China doesn’t want to roll back production too quickly, something that might create political instability.

“To be fair, China is working on this issue,” said Sean Miner, manager of the China Program at the Peterson Institute for International Economics. “The ministry of finance has set aside 15 billion dollars in order to go to workers let off of their jobs by this reduction in capacity.”

Miner said China plans to reduce production by about 10% over the next five years. But the U.S. steel industry is skeptical.

“While the Chinese government recently set a goal to cut steel excess capacity in China by 100 to 150 million metric tons over a five-year period, it has failed to specify how it proposes to achieve these reductions,” said Thomas Gibson, president of the American Iron and Steel Institute, in a statement.

According to the Peterson Institute’s Miner, five years is too long for most global steel producers to wait.

“That timeline will have devastating effects on the U.S. steel industry and Europe’s steel industry,” he said. So, in the meantime, the U.S. is pushing China to move faster and retaliating with higher tariffs on steel that does make it into the American market.