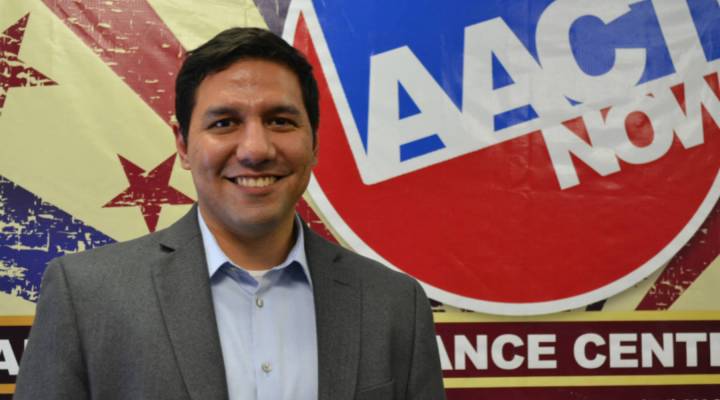 COPY
Carlos Martinez can't vote or donate to campaigns, so he instead focuses on non-partisan voter outreach, encouraging those who can to vote. Natalí Faxas

Carlos Martinez can't vote or donate to campaigns, so he instead focuses on non-partisan voter outreach, encouraging those who can to vote. Natalí Faxas
Listen Now

As the presidential race heats up, money is pouring into campaigns and super PACs. Immigration is one of the hot topics for this election, but not everyone with a stake in the issue can fully engage. For example, undocumented immigrants who are already living and working in the U.S.

Carlos Martinez is a database manager and does voter outreach  for the Advocacy Alliance Center of Texas (AACT). He hands out buttons and other voting swag, but can’t actually vote in the elections himself, or donate money to candidates he supports.

His mother brought him here illegally from Mexico when he was a 11 years old, so he’s technically a foreign national, even though he’s lived in McAllen, Texas most of his life.

“Whether I’m a U.S. citizen, a resident or undocumented, I’m still part of this community,” he said. “So … laws that are being passed by politicians really affect me directly.”

So, like others who can’t legally donate or just don’t have much cash, he participates through his work activism or volunteering.

The office of the Advocacy Alliance Center of Texas in McAllen is full of voter registration materials in both Spanish and English.

Richard Briffault, who researches campaign finance at Columbia Law School, said many undocumented people are in the same situation.

“They can’t vote and they can’t give money, that’s true,” he said, but “they can work in the campaign headquarters and stuff envelopes… They can make phone calls, if they’re calling. They can knock on doors. That’s not prohibited.”

Prominent DREAMer activist Erika Andiola does Latino outreach for the Bernie Sanders campaign, and said there are a lot of unexpected ways the ban on donations can play out. For example, she can’t buy herself a Bernie Sanders T-shirt from the campaign site, since that would technically be a donation, and therefore illegal.

“I do tell my friends, ‘Get your family members to give you a gift,’” she said of the restriction faced by many of her undocumented friends. “Get your boyfriend, your girlfriend, your partner to give you a Bernie mug. You can’t even give a dollar, but at the end of the day you also have to be patient to be able to fight for that to change.”

Professor Briffault said even if undocumented immigrants could give contributions, it probably wouldn’t have a huge financial impact. That’s because, usually, very few people in any demographic who are eligible to donate actually do.

Andiola said she often has to warn undocumented supporters about the ban against financial contributions, but encourages them to volunteer or work with the campaign.

For Carlos Martinez in Texas, explaining the rules around donations is a lower priority than general voter awareness.

“The biggest obstacle for us,” he said of his work with non-partisan AACT, “is that people are not even aware of the basic rules behind voting – the deadlines, the dates. Sometimes they’re not even aware that they have an election happening.”

He said, for now, he will focus on outreach — to those who are able to contribute both their votes and their money.