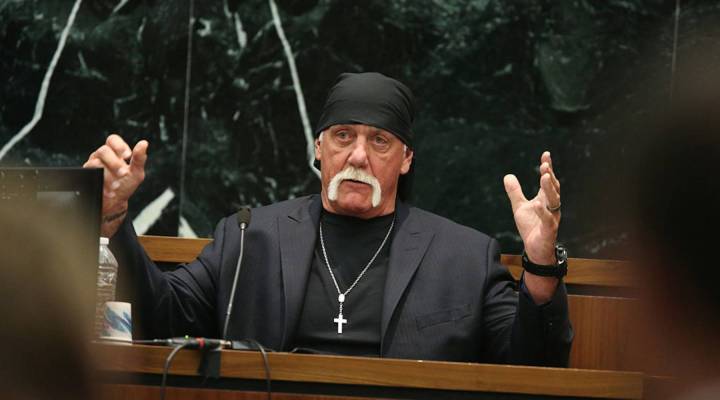 COPY
Terry Bollea, aka Hulk Hogan, testifies in court during his trial against Gawker Media at the Pinellas County Courthouse on March 8. It was revealed this week that Silicon Valley investor Peter Thiel was financing the campaign. It turns out, he's not the only investor who financially supports other people's lawsuits. John Pendygraft-Pool/Getty Images

Terry Bollea, aka Hulk Hogan, testifies in court during his trial against Gawker Media at the Pinellas County Courthouse on March 8. It was revealed this week that Silicon Valley investor Peter Thiel was financing the campaign. It turns out, he's not the only investor who financially supports other people's lawsuits. John Pendygraft-Pool/Getty Images
Listen Now

We learned this week about the unusual backstory to former wrestler Hulk Hogan’s lawsuit against the gossip site Gawker for posting sex tapes of him. Peter Thiel, the billionaire Silicon Valley entrepreneur, helped to finance the suit, which resulted in a jury award to Hogan of $140 million.

Thiel’s beef with Gawker? The site had outed him as gay. In an interview with the New York Times, Thiel said he was fighting back against the site, a move some see as flat-out revenge.

Either way, the pursuit of profits did not appear to be his main motive — which sets him apart from a growing group of investors look at lawsuits with profits as their goal.

Yes, there are investment funds that put their money behind lawsuits.  The practice is called litigation finance.

Plaintiffs and their lawyers may turn to litigation finance companies to avoid accepting a low, early settlement in a dispute. That extra funding can cover things like expert testimony and level the playing field between unequal parties.

“Especially for the personal injury plaintiff, who is truly the David in the courtroom,” said legal ethics expert Stephen Gillers of New York University. “And the Goliath is often a Fortune 500 company or a major insurance company.”

Firms like Chicago-based Gerchen Keller Capital focus on complex commercial litigation. The firm has $1.4 billion in assets under management, which it invests in situations involving legal and regulatory risk. Investors include public pension funds.

“We’re working with companies and law firms in situations where we can make a minimum investment of at least $1 million,” said Travis Lenkner, a managing director.

Lenkner said the firm only makes its money when a client wins a case or settles, which makes the investment riskier than, say, U.S. treasuries.

“We’re really in the Wild West of this industry, where there’s a lot of money out there that’s chasing a lot of cases, and we believe the result of that is going to be more litigation and higher costs,” said Bryan Quigley, senior vice president with the U.S. Chamber Institute for Legal Reform.

“The funders themselves are not currently regulated and so they can potentially pressure clients to take low settlements,” she said. “They can be in conflicts of interests.”

And she said, the companies may lack sufficient funding, such that they cannot keep their financing commitments.

In other cases, Stephen Gillers said, the finance firms could potentially gobble up a plaintiff’s settlement in a personal injury case.

“That plaintiff’s lawyer in every state has a ceiling on the contingent fee he can charge. Usually it’s a third,” he said. “There is no ceiling on what the personal injury funder can get.”