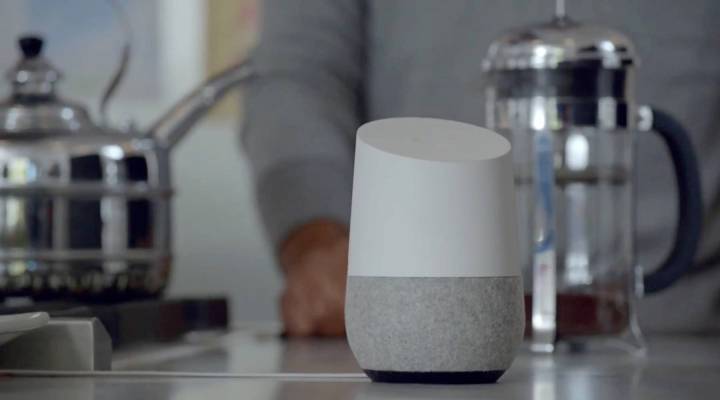 COPY
A still from Google's demo video for Google Home. Screenshot via Google

It’s not necessarily how a lot of us would spend an otherwise beautiful Northern California afternoon, but Wednesday was the first day of Google I/O, the internet giant’s annual conference for its developer community.

New CEO Sundar Pichai and his team of executives took the opportunity to roll out their newest, and hopefully for them, whiz-bangiest piece of hardware.

Our senior tech correspondent Molly Wood was there, and Kai Ryssdal talked to her about it.

What did Google unveil?

Google home is basically Google’s answer to the Amazon Echo. It’s a way for them to use what has been actually really good voice recognition technology that they’ve had for a long time as the platform for an in-home appliance, the kind of thing that you talk to, and you ask it for information, and you have it set reminders and you use it to play music, so it’s a little gadget that you talk to, just like the Echo.

What is Google’s competitive advantage?

Google’s competitive advantage is that powering the information inside this device is Google. Google actually has a huge head start in terms of voice recognition technology, but also contextual technology. Anybody who uses Google Now, which is built into the Android phones, knows that — it knows where you parked your car, it knows when you have airline reservations, it knows when you have calendar appointments and meetings you need to get to, and on top of that it has Google Search. So for anybody who really wants useful information about their day to day, it’s a pretty big advantage and a pretty compelling product that, I should point out here though, does not exist yet, and will not be coming out till some time later.

On changes at Google:

This is the first Google I/O that we’ve seen since Alphabet was created, the first time that Google has had to stand alone and say this is what we got, right? We don’t have the parachuting Google glass guys anymore because that’s another division.”

So, which is better, Amazon Echo or Google Home?

That’s such a hard question, because one is real and one is not real! To me, the only big shortfall of Amazon Echo is that it’s not connected to Google and it can’t just give me information from the World Wide Web, so I would take the Google Home product if it’s even remotely comparable in price.