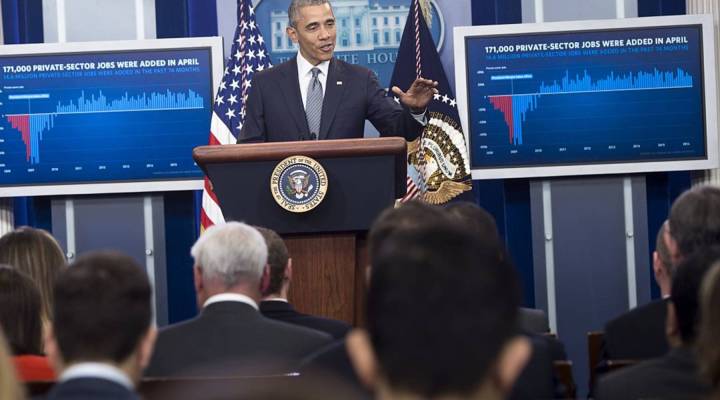 The U.S. Department of Labor reported the economy added 160,000 nonfarm payroll jobs in April, and the unemployment rate held steady at 5 percent. The number of jobs created was disappointing and fell significantly below the consensus among business economists.

“Generally, the rate of jobs gains is starting to slow,” said Bill Northey, chief investment officer at U.S. Bank Wealth Management. Here are some of the key numbers from the report:

• Labor force participation fell from 63 percent in March to 62.8 percent in April, after increasing for several months prior. The Household Survey showed a decline of 362,000 in the labor force. That follows a cumulative gain of 2.1 million over the previous five months.

• The Establishment Survey showed job gains in business and professional services, health and education, and finance. Job losses occurred in retail, government, construction and mining. Mining has lost 191,000 jobs since the sector’s recent employment peak in September 2014, as global oil prices have plummeted and domestic oil and gas development has become less profitable.

“The economy and the market are always challenged by uncertainty, and this is a season that has not lacked for uncertainty,” said Northey. Additionally, as the unemployment rate continues to fall, it will become more difficult for employers to hire the qualified workers they need.

“As you get closer to full employment, it’s going to be hard to sustain that level of job creation,” he said.

Karen Mills was administrator of the U.S. Small Business Administration from 2008 to 2013, and is now a senior fellow at the Harvard Business School. She said she pays special attention to middle-class consumers and the small business owners who cater to them.

“The economic anxiety has really not gone away,” said Mills of small business owners. “They were so hard-hit that they still are a little bit cautious whether or not the future is going to be bright enough to invest in new people.”

Mills cited several surveys, including one by the National Federation of Independent Business, showing that small business owners’ confidence in the economic future and their own business prospects have fallen recently.

There is a more optimistic view of April’s poor job-creation number: It could be an anomaly or an artifact of seasonal variation. That is American Enterprise Institute economist Aparna Mathur’s suspicion. She said she saw she saw hopeful signs in the report, as more of the long-term unemployed, and part-timers who want full-time work, are finally finding the jobs they are looking for.