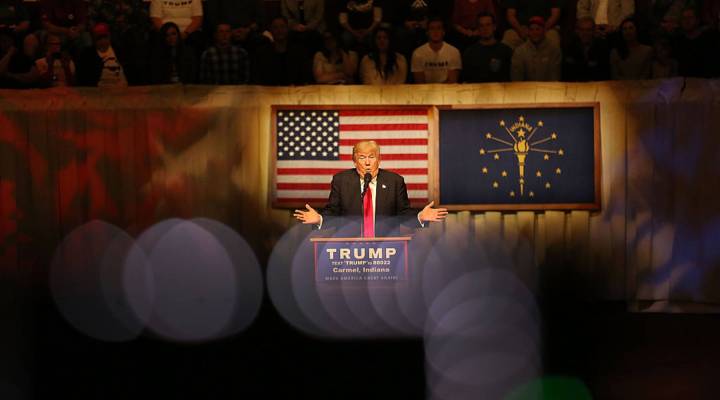 A grainy cellphone video of management at Carrier, a heating and air conditioning company, telling a crowd of Indiana workers they will be laid off over the next few years as 2,100 manufacturing jobs are relocated to Mexico.

“Please quiet down,” the executive says, as workers boo and heckle him.

The video has racked up millions of views since it was posted in February. Trump has made it central to his campaign in Indiana, where he won a crucial primary Tuesday. So has Senator Bernie Sanders, who staked his democratic campaign on the Hoosier State and won Tuesday night as well. They’ve each hammered Carrier on the stump. Sanders blasted executive salaries; Trump threatened higher tariffs and, of course, The Wall, and both targeted Obama’s signature trade deal. Their messages seem to be resonating. One factory worker told the New York Times most people in his union were trying to decide between Trump and Sanders.

“Both presidencies in the past 16 years have frayed peoples’ nerves in a certain fashion — different people, but the outcome is the same: ‘We’re not being paid attention to, we’re considered to be rubes by the Washington elite,'” said Timothy Slaper, director of economic analysis at the Indiana Business Research Center.

Manufacturing accounts for 17 percent of jobs and nearly 30 percent of Indiana’s GDP, more than any other state. It’s logistically well-placed, Slaper said, with cheap water, power and land along with a large low-skilled workforce. The sector has enjoyed a big boost thanks to the resurgent auto industry, and pharmaceutical and medical device jobs helped during the Recession.

“We’re kind of balanced between the higher-tech side of things, on the the life sciences, and then the traditional, heavier manufacturing,” Slaper said, “But manufacturing isn’t as heavy as it used to be, back in the day.”

The state’s been trying to attract new companies with and eye on advanced manufacturing, Slaper said. Like other steel-producing states, Indiana has been hit hard by cheap Chinese product. It’s also reckoning with the idea that while the sector may be healthy, it’s far smaller than it was decades ago, and it’s shrinking all over the country. So a plant closure like Carrier’s might be anecdotal evidence of big trouble for Indiana, but it’s still deeply felt.

“We’ve had a lot of devastation in these communities where one or two manufacturing plants … close, and the entire town is just a ghost town,” Slaper said. “The Carrier thing really hooks into those memories.”