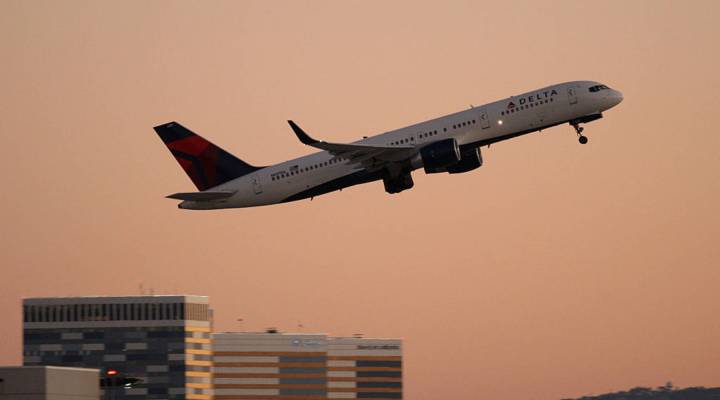 Delta Airlines announced earnings today. It’s the first of the big three to do so. And things at Delta are fine. Not great, just fine. The airline reported lower than expected revenue but big earnings numbers.

Delta saved more than $700 million on fuel over last year, but it also paid its employees more. To save money, it’s talking about reducing the number of scheduled flights. Michael Boyd, president of Boyd Group International, said he doesn’t see where those schedule cuts are going to come from.

“There are 15 percent fewer airline departures today than there were in 2007,” he said. ” Airlines have ratcheted down capacity.”

Delta said it lost money when it had to shut down operations in Brussels because of the terrorist attack. Robert Mann, head of  R.W. Mann Incorporated, said he doesn’t think events like this affect demand as much as some suspect.

“The air travel consumer has a very short memory,” he said. “If it’s not front and center in their wheelhouse, it’s not an issue that deters them.”

In other words, if you’re not heading to Belgium or Brazil in the next few weeks, you’re probably not thinking about terrorism and Zika.

Increasingly, though, airlines are less worried about selling you the seat. Henry Harteveldt, founder of Atmosphere Research Group, said airlines want you to spend money while you’re on the plane. They’re looking for you to buy extra leg room and WiFi or sign up for that loyalty program because that’s where they can make some profit. That goes for majors like Delta and American just as much as budget carriers like Spirit and Frontier.

“Buying that underlying ticket, that’s almost a break-even effort for the airline,” he said. “There are lots of different businesses within the broader airline company that airlines like Delta will be looking at as they try to figure out how to make money.”

Airlines will hope to make money by delivering what analysts are calling “that living room experience.” That is, if your living room has 100 people in it and tray tables.