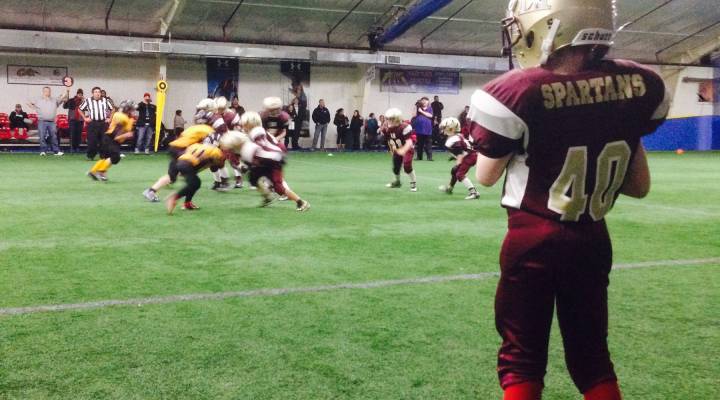 COPY
According to a report by the Sports & Fitness Industry Association, participation in youth tackle football dropped 18 percent between 2009 and 2014. Adrian Ma/Uptown Radio

According to a report by the Sports & Fitness Industry Association, participation in youth tackle football dropped 18 percent between 2009 and 2014. Adrian Ma/Uptown Radio
Listen Now

Even during football’s off-season, the controversy around football-related concussions continues to take a toll on the sport, especially at the youth level. According to a 2015 report by the Sports & Fitness Industry Association, participation in youth tackle football has dropped nearly 20 percent since 2009.

And while you’d think this would be bad for the football business all around, helmet manufacturers may actually benefit from what some are calling the sport’s “concussion crisis.”

“Concussion risks have been blamed for recent declines in youth and high school football participation,” Andrew McWilliams said, an analyst at the market research firm BCC Research. At the same time, “these concerns are driving the market towards more sophisticated – and expensive – types of helmets.”

As a result, McWilliams said he expects the market for football helmets to double from its current value of around $100 million to about $200 million by the year 2020.

According to the estimates of one major helmet maker, Xenith, about 97% of all football helmets sold in 2016 will go to youth and high school players, which means concerned football-parents, like Monay Williamson from Long Island, New York, will be driving the boom in helmet sales.

“I’m always scared,” Williamson said, as she watched her eight-year-old son, Christian, take the field at an indoor youth football game in February. “The other day he did a hit that scared me so bad cause it was head-to-head, and he flipped and everything.”

Despite her fears, Williamson said she takes comfort in the belief that her son’s helmet, which looks nearly identical to the kind professional players wear, will keep him safe.

“There is no such thing as a concussion-proof helmet,” Rich Polo said, who runs a football supply shop in Long Island called Endzone Sports. But that hasn’t stopped helmet makers from touting lots of new features – such as inflatable air-bags, shock absorbers, and suspensions – that supposedly reduce the risk of brain injury. “You’ve seen more helmet changes in the past five years than you have in the past thirty,” he said.

Of course, all that new technology also means a higher price tag. A decade ago, a top-notch kid’s helmet cost about $150. But another football-parent, Anthony Nace, said he recently paid $300 for a helmet for his son A.J. It’s expensive, he said, but worth it.

Nace, who played football in high school, said that comparing the helmets he wore then to the one his son uses now is “like comparing a Hyundai to a Lamborghini.”

Asked whether he would ever consider spending a little less on a helmet without all the latest bells and whistles, Nace said, “No, it’s not an option. There’s certain things you don’t compromise.”

But more expensive helmets might not fix football’s image problem. And that’s something the industry will have to tackle eventually.