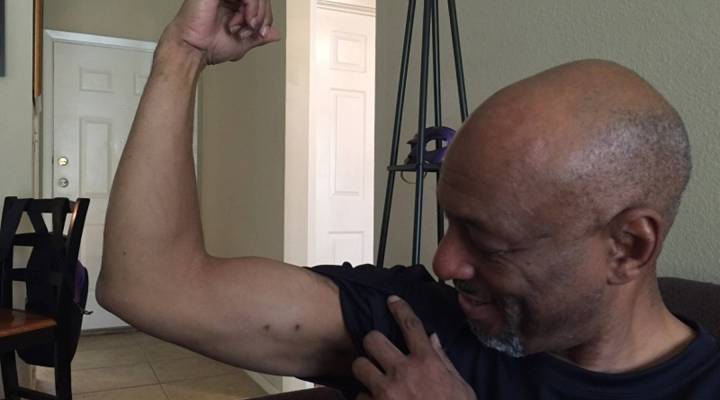 COPY
Warren J. Smith holds up his arm to show where he had an IV to administer antibiotics. Lauren Silverman

Warren J. Smith holds up his arm to show where he had an IV to administer antibiotics. Lauren Silverman
Listen Now

The Holy Grail in health care is finding a way to cut costs and improve outcomes. Researchers at Parkland Hospital in Dallas say they’ve uncovered a way to do both — so that patients who typically have to stay in the hospital for more than a month can go home and care for themselves.

It all started with a motorcycle accident in 2009. Since then, he’d had dozens of operations, round after round of antibiotics and countless days in a hospital bed –isolated in sterile rooms.

“It was like the kid in the plastic bubble,” he said, laughing.

At 49, out of his job in sales, Smith ended up at Parkland Hospital. If he wanted to keep his left leg, he’d need to complete another course of antibiotics — intravenously — through a port in his arm. For patients with health insurance, this usually means a minor surgery, then daily visits from a home health nurse to give the medicine. For uninsured folks like Smith, it means being stuck in the hospital for weeks, sometimes a month or more, or going to assisted living.

An experimental program at Parkland went in a new direction, sending patients like Smith home with the tools to care for themselves.

Warren J. Smith III shows how he used a wire hanger and the tools given to him by Parkland Hospital to take his antibiotic medication.

For a month, every day around seven o’clock, Smith would open his fridge, grab a plastic bag with antibiotics, then clean and connect it to a small plastic tube coming out of a vein in his arm, right below his bicep. To get the medicine to drip in, he rigged together an IV pole with a metal hanger.

Smith would hang the hanger on a lamp, or a picture frame above his desk, even on a cabinet above the stove so he could cook. He didn’t have to be in the hospital and he felt free. “Having the IVs and administering at home gave me that self confidence that I’m still somewhat in control,” Smith said.

He did all this – without any problems. Other uninsured Parkland hospital patients were doing it as well: Nearly a thousand of them.

Dr. Kavitha Bhavan, who ran the Parkland study, says the 944 uninsured patients who administered their own IV antibiotics were wildly successful. There was a safety net built in – weekly checkups and a 24-hour hotline. Still, the results of the four-year study — just published in PLOS Medicine — challenge traditional ideas about what patients are capable of.

“Not only do they do it well, but they’ve done it better, in our study, when we looked at the controls who went home with some home health services,” said Bhavan, who is also Medical Director of the Infectious Diseases Parenteral Antibiotic Therapy Clinic at Parkland.

Some educated, insured patients have been safely using IVs at home for years — but this group of patients was different. Many were far below the poverty line, some were even homeless. To teach patients, a group of nurses, doctors, and social care workers did bedside training. They also put a QR code on every bag of antibiotics that links to a YouTube video in English and Spanish for easy access.

By letting patients go home and care for themselves, Parkland estimates in 2015 alone, the program helped it save more than $7 million. It also freed up 6,000 hospital bed days. Those savings caught Dr. Keith Kaye’s attention. He’s corporate director of Infection Prevention at the Detroit Medical Center.

“If you’re’ looking at big urban populations — Detroit, Chicago, L.A., New York — I would imagine that there could be similar programs that could sprout up in the near future,” he said.  The key, Kaye said, is careful patient selection and monitoring.

Smith  successfully completed his treatment. But an infection came back, and surgeons had to amputate his left leg. Still, he finds solace in the fact that he tried everything he could, and in the process, he learned about his own body, and became empowered to care for himself.

“I try to tell other people you have to be willing to try,” Smith said. “If you’re just going to sit there’re and feel sorry, it’s not going to get better. And for me, that was the attitude I took.”

This is one program, so hard to tell yet if the results can be duplicated elsewhere. But the key, Smith and Dr. Bhavan agree, is for doctors and health care workers to collaborate with patients.