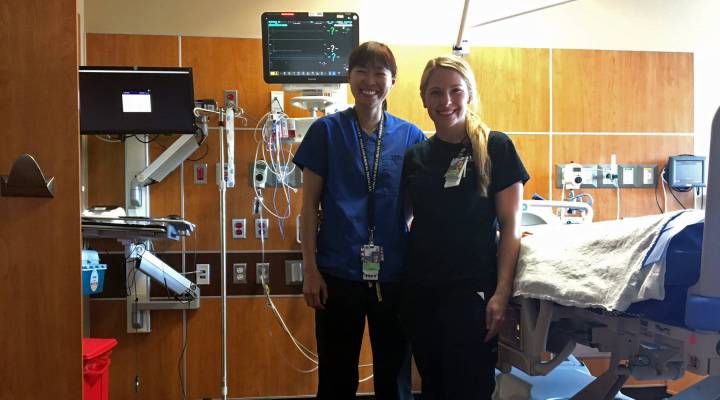 It would have been easier to leave 56-year-old patient Mary Hill in her hospital bed. She has tubes and lines attached to her. She just had two emergency stomach surgeries after going into septic shock, and she can’t move her legs.

Instead, Hill is being supported as she uses her arms to lift her legs, one at a time, and pull them toward the edge of the bed. Cara Tabor, the physical therapist in the surgical intensive care unit at Parkland Hospital in Dallas, Texas, is gently supporting her.

“I’m sorry, I know this is not pretty,” Hill says.

To that, Tabor replies, “It’s not meant to be pretty, because you’re doing all the work.”

Hill is doing all the work for a reason. Like every patient in this ICU, and 76 others across the country, Hill is on a treatment plan designed to prevent ICU delirium, an intense period of disorientation and confusion that can develop as a result of being hospitalized. It can bring on paranoia, hallucinations and serious long-term side effects.

Any hospital stay can be traumatic. But 30 percent of patients in intensive care units experience ICU delirium. The rate for ICU patients on ventilators, who make up about a third of the ICU population, is even higher, at 70 percent. And ICU delirium can have long-term negative health effects.

A team of physicians, nurses and physical therapists at Parkland are taking part in a national effort to prevent it. Trauma Surgeon Brian Williams oversees the program at Parkland.

“[Mary Hill] is a perfect example of a patient that we probably would have hurt a couple years ago,” Williams says.

Not intentionally hurt — hurt by giving too many sedatives and by allowing her to lie in bed all day with the blinds closed. That’s been standard ICU protocol since the ’90s. Now, Hill has a team of doctors, nurses, physical therapists and pharmacists all closely monitoring her medication, cutting back on sedatives as soon as possible and constantly getting her moving.

“You can see two weeks after being septic and intubated, she’s mobile and talking,” Williams says. “[A] dramatically different outcome than would have happened a few years ago.”

ICU delirium affects people of all ages. It can mean more days in the hospital, where just one day can cost $10,000. It can increase a patient’s chances of dying. And, a third of patients who suffer delirium and make it home can have cognitive problems that mimic traumatic brain injury or mild Alzheimer’s up to a year later.

To put it simply: Critical care doctors have been saving patients’ lives but leaving them without the ability to think well, to go back to work or to lead their life as they wanted to before, Dr. Wes Ely says.

Patient Marty Vanden walks with the help of physical therapist Cara Tabor and a SICU nurse as part of the ICU liberation study.

After studying ICU delirium for the past two decades, Ely designed the program Parkland and many other hospitals are following: It’s called ICU liberation, and so far, it’s been a success.

“It dramatically reduces the amount of exposure that patients get to these dangerous drugs,” Ely says. “It gets them out of the bed sooner — plus involving the family so patients get re-oriented — and it makes a massive difference to the patient.”

A paper published in the journal Critical Care Medicine shows adopting the ICU liberation program improves survival and reduces the amount of delirium and coma by 15 percent.

That doesn’t mean it’s been easy. Parkland nurse Kim My says sedating patients and leaving them in their beds is sometimes the easier option.

“As we start getting them up, getting them un-sedated and out and about, it’s a lot more dangerous for them. We’ve got lines and tubes and all these things that could possibly go wrong,” My says.

She’s happy to be a part of a cultural shift in the ICU to work in teams and manage those new risks.

For patient Mary Hill, one sign she’s getting better is making it into her wheelchair. After 10 long minutes of struggling from the bed to the seat, Hill is out of breath, but encouraged.

“Because you know you’re getting stronger,” Hill says. “You may not realize it right then but the next day you can do something else.” Like rolling over and sitting up, small movements that together will get Hill closer to home.