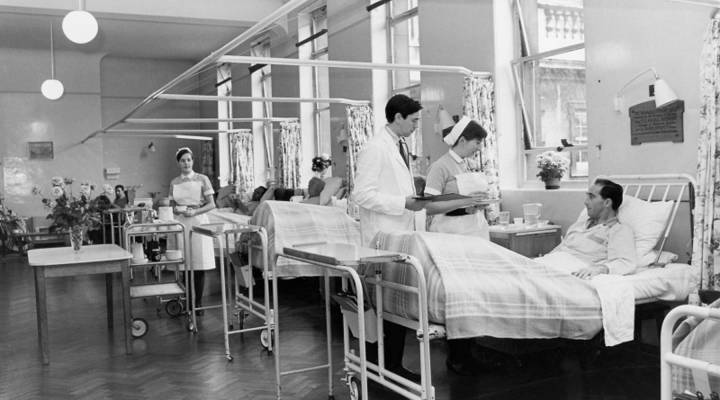 COPY
It's a complicated relationship between patient and provider in the hospital at home program; if enough patients return to Mt. Sinai within 30 days, the hospital will be penalized.   Photo by George Freston/Fox Photos/Hulton Archive/Getty Images

It's a complicated relationship between patient and provider in the hospital at home program; if enough patients return to Mt. Sinai within 30 days, the hospital will be penalized.   Photo by George Freston/Fox Photos/Hulton Archive/Getty Images
Listen Now

A recent study reminded us that medical errors are the third leading cause of death in the United States, claiming the lives of 251,000 Americans every year.

A healthcare experiment going on in New York could help put a dent in that frightening statistic.

A year and a half ago, Mt. Sinai launched a pilot to deliver hospital-level care at home to treat certain patients. Patients a lot like 89-year-old Daniel Entin.

On this visit, Entin is just five days removed from the hospital, where he got treatment for his lymphedema, a condition that leads to sores and open wounds on his legs.

Typically someone in his situation would have gone from the hospital to a skilled nursing facility. But he opted to get intensive rehab and nursing services from Mt. Sinai staff at home.

“When I was a child feeling sick, I would tell my momma. And my momma would call the doctor and the doctor would come to the house,” he said. “You are slowly going to creep your way back to that system which existed 80 years ago.”

Some 20 years of research show that care at home is cheaper and a person is 19 percent more likely to be alive six months after receiving treatment at home than in a hospital.

Mt. Sinai’s Dr. Linda DeCherrie said it’s no mystery why people fare better outside the hospital. In the hospital, patients fall, catch so-called super bugs or turn up their noses at the meals.

“Patients often want it. Transitions cause more confusion and complications,” she said. “When they are at home, they have their own family and their own food. All of that is tremendous.”

That said,  bringing the hospital and all of its and tools to the patient is a challenge, DeCherrie said.

“This is a real paradigm shift in medicine. People will often say on first glance, ‘That sounds so great that we should definitely do that,’ but when you really get into it, it’s a totally different way of providing care,” she said.

There are logistics to navigate.

As DeCherrie’s colleague points out, it’s easier to order Chinese at midnight in Manhattan than to find a tank of oxygen after hours.

And there’s a human piece too, as health officials consider duplicating this program.

As a patient, Daniel Entin said he’s seen some gaps in care.

“Right now they are teaching me how to care for myself, right? The nurse says ‘I’ll show you how to dress your wounds.’ And I think that’s not quite what I was wondering about. I can hardly reach my feet at all. They gave me a taste of what was possible,” he said.

Hospital at home reveals the complicated relationship between patient and provider.

If enough patients like Entin return to Mt. Sinai within 30 days, the hospital will be penalized. But the more Mt. Sinai spends keeping him healthy at home, the harder it is to realize savings with this innovation. Knowing where to draw that line and limit care is part of what it will take for this model to be successful.