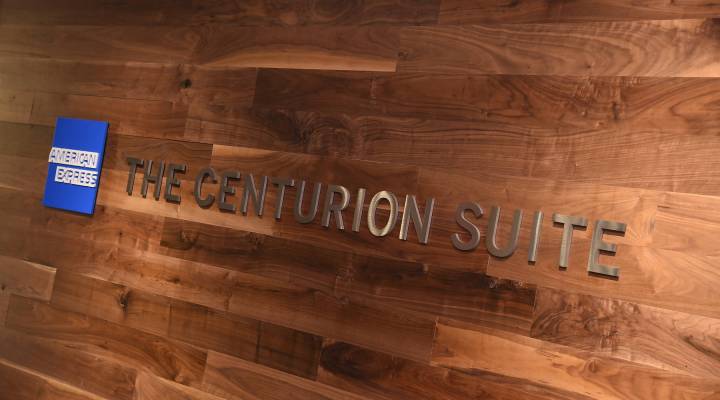 You have to be invited to sign up for American Express’s most exclusive offering, Centurion, informally known as its Black card, and it will cost you $10,000.

But it comes with envious looks and a dedicated agent.

Brian Kelly, founder of ThePointsGuy.com, said that thanks to his new black card, he has what might be called his own personal concierge.

“I have his name and personal line and we work together on my travel,” he said. “His name is Howard.”

Hopefully Howard can help. Kelly says thanks to high end service like Howard, the notoriously secretive black card is still popular. But AmEx’s Platinum card is seeing a lot of competition. Yesterday, American Express held its annual investor’s day when it sought to reassure shareholders in the face of plummeting profits. One issue the company is facing: rival companies competing with their own credit cards, offering lower fees and other perks.

Jason Arnold, a senior research analyst at RBC Capital Markets says it’s not like the 80’s when the average consumer had just one credit card.

“Maybe in the past having a status symbol card made sense but it’s just not that environment anymore,” he said. “It’s more about utility these days than about status.”

With AmEx’s platinum card, Arnold said, “you used to be able to get into several different airline lounges — now you can only get into one.”

Instead, he notes that today’s consumers are more cost conscious. Especially when it comes to a credit card like American Express’ platinum, that costs $450 a year. “It’s just that high end card in general has certainly lost its appeal,” he said. “If it doesn’t give you much from a benefit standpoint and there’s other options out there, you’re going to go with those other options. Because that’s a lot of money.”

Unless you can afford a card made of titanium.

“It killed me just a little bit to get a $10,000 credit card with a zero point sign up bonus,” Kelly added. “But Centurion is really about the perks.”