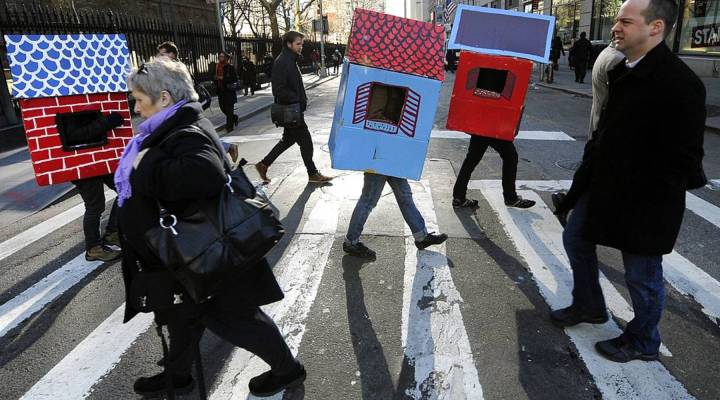 COPY
People dress as foreclosed homes during a protest in 2012 in New York. TIMOTHY A. CLARY/AFP/Getty Images

People dress as foreclosed homes during a protest in 2012 in New York. TIMOTHY A. CLARY/AFP/Getty Images
Listen Now

Back in 2004, when the housing market was on fire, home ownership rates peaked-at about 70 percent.

We all know what happened next.  The housing bubble burst. The economy collapsed. Millions of people lost their homes.

It has been a long slog back, but we got evidence Tuesday that the housing crisis might finally be firmly in the rear view mirror.

According to research from Corelogic, which tracks the housing market, the number of foreclosures has fallen to a small fraction of what it was during the Great Recession, and the number of homes which are at some stage of the foreclosure process is at the lowest level since 2007.

But home ownership rates — the percentage of households where occupants own the homes they live in — they haven’t rebounded. They are at their lowest level in more than a quarter century.

So where did all those foreclosed homes go?

“Foreclosures were soaked up largely by investors, who were buying up properties as rentals,” said Daren Blomquist, an economist at RealtyTrac. “We saw a lot of the hedge funds and big private-equity groups get into this business.”

Bloomquist said they were taking advantage of cheap housing and the fact that people who lost their homes still needed a place to live.

Frank Nothaft an economist with Corelogic, says in 2006 there were nine million single family houses in in the rental stock.  That number increased by three million in the following seven years, he said.

As a result there were many fewer homes for sale, which helped drive up prices in markets around the country.

Those higher prices may make investors and current homeowners more willing to sell.

But Susan Wachter, a real-estate professor at the Wharton School in Philadelphia, said that’s only half the equation.

“The housing market has recovered,” she said. “Housing finance has not recovered.”

She says many people who might consider buying or trading up are still struggling to get a mortgage.

Renting may be the new normal.