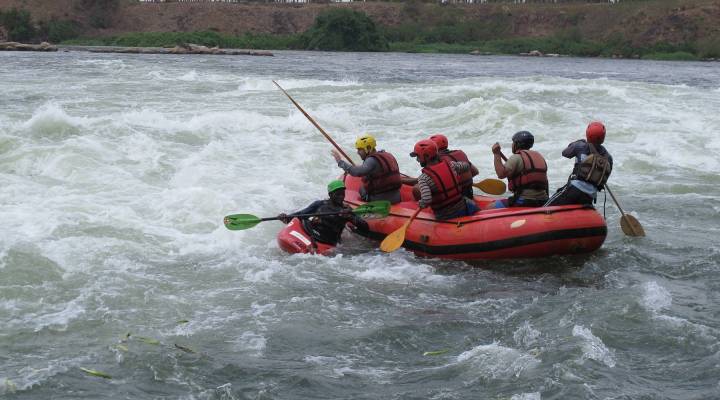 COPY
River guides help tourists rafting the intense rapids on the White Nile. Many are worried they will lose their jobs if a planned hydroelectric dam floods the rapids near Uganda's Kalagala Falls. Kimberly Adams/Marketplace

River guides help tourists rafting the intense rapids on the White Nile. Many are worried they will lose their jobs if a planned hydroelectric dam floods the rapids near Uganda's Kalagala Falls. Kimberly Adams/Marketplace
Listen Now

JINJA, UGANDA – The rapids near Kalagala Falls are considered some of the best in the world, drawing professional kayakers who train in the warm waters year-round. Tourists come as well, clinging to yellow rafts as guides steer them along the surging river that races through the tropical forest.

Those rapids are powered by the White Nile – a tributary of the Nile River – and they are at the center of a fight over how Uganda should harness the river to fuel its economy.

The Ugandan government wants to build the Isimba dam, which would create a large reservoir and submerge the rapids of the Kalagala Falls 25 miles away.

Alex Muzungu, a tour guide for one local white water rafting company, Nile River Explorers, expects that once the dam is built, he’ll lose his job because the rapids will be flooded.

He remembers the impact of a different dam, the Bujagali dam, built upstream in 2012. It shortened the length of the route available for rafting and kayaking, harming local tourism businesses.

“Since they built that dam,” he said, “most of the things changed. All the rapids changed, and we ended up losing a lot of people who used to come [for tourism].”

Tourists rafting the intense rapids on the White Nile.

To secure funding for the Bujagali dam, Uganda signed an indemnity agreement with the World Bank, promising the government would protect the rapids Muzungu and others currently rely on from future development.

“The government quite clearly signed this agreement that it would not violate the Kalagala Falls which are in their own right an important area for the spiritual value and the tourism industry there,” said Josh Klemm, policy director at the environmental advocacy group, International Rivers.

The World Bank is worried the Isimba dam — at least as currently planned — could violate that agreement. The dam isalready under construction, and World Bank spokesman David Theis said the international financing agency has expressed its concern to the Ugandan government on multiple occasions.

“The government has assured us it won’t take action that will have an impact on the Kalagala Falls site until it’s worked with us to ensure that the objectives of the indemnity agreement are compliant,“ Theis said.

But to make just to make sure, Theis says the World Bank is sending a mission to Uganda next week to “reaffirm the government’s position.”

Klemm of International Rivers is promoting an idea supported by much of the tourism industry — scaling back the size of the dam.

“Depending on the height of the dam,” he said, “the reservoir that would be filled behind it could submerge the Kalagala Falls or it could be built to a height that would be lower and generate less power but it could still ensure that the Kalagala Agreement that it signed onto wouldn’t be violated.”

Ugandan Energy Ministry spokesman Bukenya Motovo said the government is aware of the economic consequences of these kinds of projects.

But, he said, “We have to accept the fact that we have an energy balance problem. Uganda doesn’t have enough energy to drive its economic development programs.”

According to the World Bank, only 18 percent of Ugandans have access to electricity. Motovo points out that what the country does have are substantial water resources.

“Hydropower is first of all clean energy, green energy,” he said. “We try as much as possible to minimize the impacts or even manage those impacts, because there is nothing you are going to do that does not have an impact on anything, including human beings and animals and fish.”

Motovo said eco- and adventure-tourism are important for the economy, but not a big enough portion of the overall economy to offset the energy gains from the dam projects.

“We have to choose between two,” he said. “Which one do we take? Do we sacrifice energy for tourism? Do we run both? Or do we sacrifice tourism for energy?”

And that increased energy powers other industries in the region besides tourism, like the sprawling industrial complex of Steel Rolling Mills on the outskirts of Jinja. According to plant electrical manger Kolumbi Charles, the foundry previously had to schedule its operation around regular power outages.

“We could be told, ‘Steel Rolling Mills, please… specifically on such a day, from this time to this time, you have no power,’” he recalled. “You couldn’t help it.”

Kolumbi Charles of Steel Rolling Mills in Jinja, Uganda has seen first hand the benefits of hydroelectricity, but still thinks their needs to be a balance between energy development and protecting natural resources.

Charles estimated with the extra power from the Bujagali dam coming online back in 2012, the company was able to double its staff. It went from eight to 24 hours of operation per day. That extra productivity helped fund a new plant where the company recycles locally collected scrap metal so it doesn’t have to import raw materials. But even Charles says there needs to be a balance between protecting the falls and making power.

“We have foregone our falls, several of them, in the name of generating power,” he said. “Now the question is, for how long should this continue?”

Charles said he’s confident the Ugandan government will be able to answer that question. The tourism industry is less convinced, and is lobbying hard to make sure the answer works in their favor.