Evictions, tenants told to move out by landlords, dropped by 18 percent in New York City over the last year, according to new reports out this week. This after the city allocated more money for legal services to help tenants challenge these evictions.

Still, there were nearly 22,000 evictions in New York City in 2015 and nationwide, it’s argued that evictions have become a disturbing, routine feature of life at the margins.

Matthew Desmond is a sociologist and co-director of the Justice and Poverty project at Harvard. He’s spent the last eight years researching evictions, focused on  Milwaukee. He joins Marketplace Morning Report host David Brancaccio to talk about his new book, Evicted: Poverty and Profit in the American City.

Fewer NYC evictions after tenant rights are beefed up 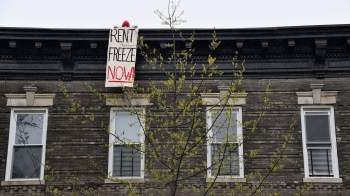