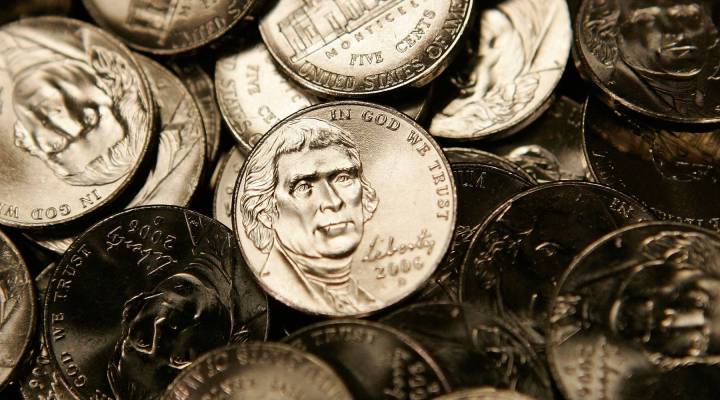 COPY
This year marks the 150th birthday of the nickel. Alex Wong/Getty Images

This year marks the 150th birthday of the nickel — a coin that played a surprising role in the transition away from precious metals.

As it turns out, that’s a transition you can actually hear. “We can tell instantly if there’s something that’s not silver,” said Lou Chorney, who runs a Boston coin shop called the Colonial Trading Company. Tap two silver coins together and they’ll produce a high-pitched ringing. Do the same with two nickels and you won’t hear much. “It’s kind of a clunk,” said Chorney.

The word “nickel” didn’t always mean five cents. It originally referred to the metal used to make the coin. “The first nickel is actually a three-cent nickel,” Chorney said.

America’s first five-cent nickel was minted in 1866. According to Douglas Mudd, who studies coins at the American Numismatic Association, the story of the nickel is actually a Civil War story. “At that time, money in people’s eyes was considered to be silver and gold,” said Mudd.

The problem was that people tended to hoard precious metals. “Any time you have a war, money becomes scarce,” Mudd said. But people wouldn’t hoard coins that weren’t intrinsically valuable, like the nickel.

As a result, the humble nickel helped unclog the postwar economy. It was also one step in the shift toward the money system we know today. “The coinage value is not based on the amount of metal it has, but upon what it symbolizes in value,” said Mudd.

Nickel coins rose in popularity in the late-19th century. Five cents could buy you a loaf of bread or a bottle of Coca-Cola. It could also buy you a ticket to the “Nickelodeon,” which was the name of a cheap theater in Boston.

A Nickelodeon program from 1888

“The word nickel in the title, of course, means that it would have cost five cents to get in,” said Elizabeth Barker director of the Boston Athenaeum. “I think the word has such a nice melody to it.”

Within a few years, the “Nickelodeon” became a part of popular culture — and so did the five cent coin we know today.