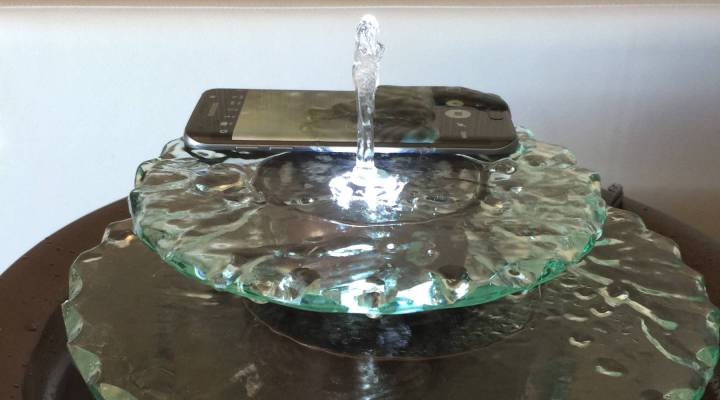 A Samsung Galaxy S7 getting a little birdbath.  Molly Wood/Marketplace

A Samsung Galaxy S7 getting a little birdbath.  Molly Wood/Marketplace

Sadly, this dispatch is not coming to you from Mobile World Congress in Barcelona, but happily, lots of folks were kind enough to brief me back here in San Francisco.

MWC is the big mobile, telecom and other portable technologies show that’s kind of replaced CES as the place where phone-makers show off their hot new Flagship Devices. I’m capitalizing that because it’s practically a proper noun. It’s even a big deal when a company decides to do a Flagship Device, like Xiaomi, which is slowly creeping into higher and higher-priced territory (but still way cheaper than an iPhone).

But despite big announcements from Xiaomi, LG (the new G5 is a really nice re-do on an otherwise impressive series of phones), HTC and even HP, Samsung is the No. 2 smartphone seller behind iPhone, and its Galaxy S7 and S7 Edge are sure to grab most of the buzz. I got to check out the new phones at an event in San Francisco and was happy to see that Samsung is listening to its customers and bringing back much-beloved features like an SD card slot for expandable storage.

That doesn’t sound like such a big deal, but when you’re choosing an Android phone over an iPhone, one of the things you want is flexibility, and Samsung’s phones always gave you that: removable batteries, expandable storage, a sense that you weren’t just dealing with a pretty, closed box. Oh and the S7s are water-resistant–and not just splash, but dunk. Um, finally? Thank you?

I also talked to Stripe before Barcelona about its new product, Atlas, which lets anyone from outside the US easily start up a business and start selling to people in America. If only it were that easy to set up a business IN the US and sell to the US, right? I also happen to think Stripe is a really interesting company that’s used clever design to abstract away a lot of annoying financial logistics that used to be really hard to do. And I got company co-founder and president John Collison to explain what it is Stripe does in simple detail–have a listen.

All that and a little reaction on Facebook’s Reactions, and the latest in Apple-FBI. Thanks for listening and hey! You can now subscribe to the Dispatch with this handy RSS link, or set up a Soundcloud playlist here.

Correction: An earlier version of this article wrongly identified Stripe co-founder and president John Collison as Patrick Collison. Patrick is John’s brother and co-founder, but was not interviewed for this segment.