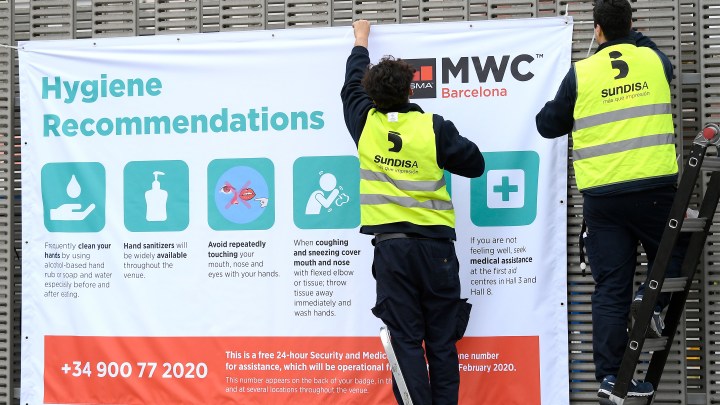 COPY
Workers install a banner with hygiene recommendations outside the Mobile World Congress MWC venue on Feb. 12. The event has since been canceled due to coronavirus fears. Lluis Gene/AFP via Getty Images
COVID-19

Workers install a banner with hygiene recommendations outside the Mobile World Congress MWC venue on Feb. 12. The event has since been canceled due to coronavirus fears. Lluis Gene/AFP via Getty Images
Listen Now

The Mobile World Congress, the largest trade show in the mobile and telecom industries, canceled this year’s event in Barcelona later this month because of COVID-19 fears.

There are a lot of ways to think about the cost of the virus-induced cancellation: 100,000 visitors no longer flying into Barcelona, no longer spending half a billion dollars on restaurants and hotels and transportation. Other costs, though, are harder to measure.

Ask mobile industry analyst Avi Greengart, who runs his own company in New Jersey. To him, the cost of a canceled Mobile World Congress is about $3,000 in non-refundable travel expenses. But he said the bigger losses were the insights and the light-bulb moments from back-to-back conversations.

“When you’re meeting with a whole bunch of companies doing the same kind of thing, you can tease out trends that you might not have been able to have gotten from one meeting one week, another meeting two months later,” Greengart said.

For a small business like his, the trade show is an annual chance to connect with device makers or carriers from Brazil, India, Finland or China. It’s also an efficient way to step out of the garage, as it were, said marketing consultant Dorie Clark.

“So often, in the tech field, you are in heads-down mode, and all you can do is what is immediately in front of you,” Clark said. “A conference is the opportunity to take the pulse for new trends. You go into heads-up mode.”

For the big mobile companies that spend millions each year in Barcelona on marketing, cancellation means they’re missing out on discovery, according to analyst Roger Entner at Recon Analytics.

“This discovery process, of finding new ideas for the big companies, is an incalculable loss because they are relying on innovation from small companies to become competitive,” Entner said.

To be sure, the mobile industry is good at conference calls. But Entner pointed out the in-person handshakes that lead to deals won’t happen on Zoom or Skype.