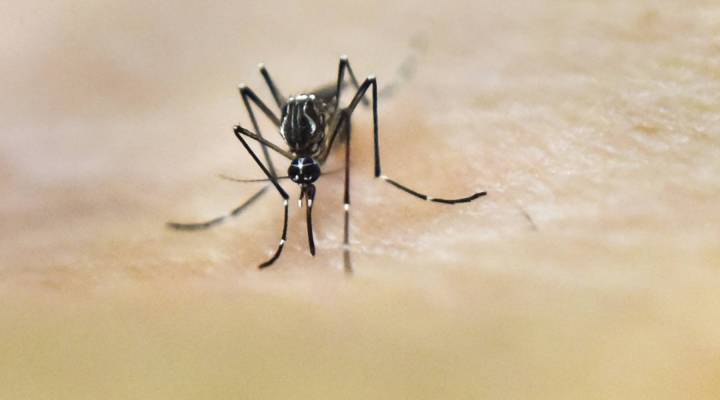 COPY
An Aedes Aegypti mosquito is photographed on human skin in a lab in Colombia.  LUIS ROBAYO/AFP/Getty Images

An Aedes Aegypti mosquito is photographed on human skin in a lab in Colombia.  LUIS ROBAYO/AFP/Getty Images
Listen Now

The mosquito that transmits Zika — and yellow fever, and dengue, and chikungunya, by the — is technically an invasive species. And it may surprise you to know that it’s been eradicated in dozens of places in the Americas over the past hundred years. But those efforts have failed.

One big reason we have the Panama Canal today is successful mosquito eradication at the turn of the 20th century.

“The French attempted the opening of the Panama Canal but they had to abandon it because of fatalities due to infection from yellow fever and so forth,” explained Nikos Vasilakis, associate professor of pathology at the University of Texas.  Once mosquitoes were controlled there by draining swamps and applying oils and chemicals, the canal could be built.

In Brazil, a campaign in the thirties sponsored by the Brazilian government and the Rockefeller foundation wiped out Aedes aegypti, the same mosquito responsible for the Zika outbreak today. “They were going house to house, evaluating what were the breeding habitats,” said Vasilakis, and telling people to get rid of old tires full of water or uncovered cisterns where the mosquitoes bred. They even fined people who were non-compliant and imprisoned repeat offenders.

This was expanded to 18 countries in the forties and fifties, DDT was added to the arsenal, millions of dollars were spent and it was successful.

And then it failed.

“It failed because of its success,” explained Vasilakis. Officials saw that for several years, there were no Aedes aegypti mosquitoes. “They wondered well why the hell do we need to spend money maintaining this program — the problem is not here any more, so we’re good!”

But they weren’t good. The mosquitoes came back in about a decade, traveling from countries such as Venezuela that were not part of the eradication program. And in many places, so did disease.

There are examples where dangerous insects have been controlled in the long term. Flesheating screw worms used to be found in middle America until the United States started to go after them beginning in 1953.

The sterile flies caused the population to crash, and the strategy successfully eradicated the worms all the way down to Colombia.

“That is maintained to this day,” said Strickman, “by release of sterile male screwworm flies in about a hundred kilometer section of Panama.”

We are screw worm free because a cloud of sterile flies has been protecting us in Panama for the past 62 years. There are similar strategies available for controlling disease-bearing mosquitoes today that go beyond the use of pesticides.

“The newer experimental techniques are biologically based in that they involve the release of altered mosquitoes that go out and in one way or another affect the rest of the population.”

One strategy that has shown promise in Brazil is spearheaded by a company called Oxytec. They’ve bred male mosquitoes (that do not bite) that are genetically altered to produce young that die off before reaching adulthood.  Similar to the radiation-sterilized screwworm flies, the Oxytec mosquitoes cause population crashes. Trials in Key West have been delayed as they await FDA approval.

The options are numerous, the trick is implementing them … and then not abandoning them when they work.