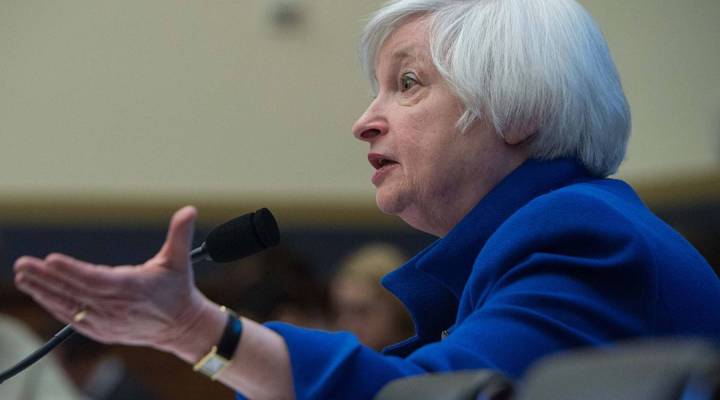 “Financial conditions in the United States have recently become less supportive of growth.”

That statement—though dry—caught the attention of Marketplace this week as we listened to Fed chair Janet Yellen speak to Congress this week. She went on to explain three components that particularly worry her. Let’s take a closer look at each.

When the stock market is down, many people feel less rich and tend to spend less.

“Further appreciation of the dollar.”

This one may require a bit more explanation. Ultra-low interest rates have been a fixture for years, so it sounds strange to hear about higher borrowing costs these days. But Yellen’s talking about riskier borrowers. These companies always have to pay higher interest rates, but it’s worse than usual right now.

It’s something that can be seen playing out in the bond market. One gauge of how worried investors are about the future is the difference between the high interest rates for bonds of riskier companies and the low interest rates for ultimate safe bet, U.S. Treasuries. That difference, the spread, is way up lately. And when borrowing money gets really expensive, bad things can happen.

“It means jobs won’t be created and spending won’t happen,” explained Steve Blitz of ITG. “And some of these firms may have to shut down.”

As far as this and the other financial conditions bugging Yellen, former Fed economist Ann Owen pointed out that the central bank toolbox only does so much.

“Unfortunately, many of these issues are not going to be directly fixed by a change in the interest rates.” she said. “In some cases, they’re actually going to get worse.”

There’s not a lot of cheer in Yellen’s testimony. But if nothing else, it’s the voice of a Fed that understands its limits