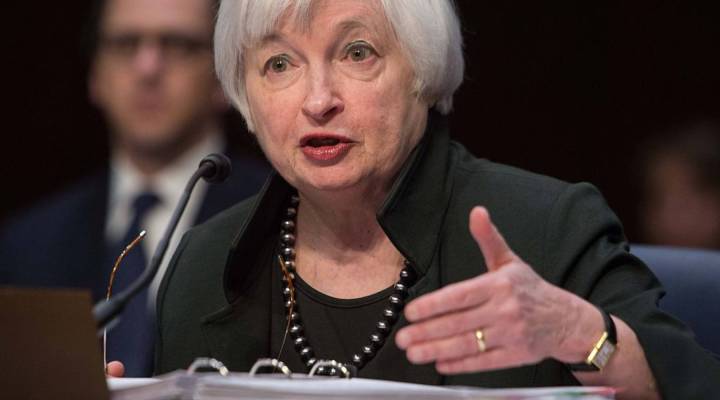 COPY
Chair of the US Federal Reserve Janet Yellen testifies before a Joint Economic Committee hearing on 'The Economic Outlook,' on December 3, 2015. NICHOLAS KAMM/AFP/Getty Images

Chair of the US Federal Reserve Janet Yellen testifies before a Joint Economic Committee hearing on 'The Economic Outlook,' on December 3, 2015. NICHOLAS KAMM/AFP/Getty Images
Listen Now

We have a little game we like to play, well, Kai likes to play, called: What is Janet Yellen thinking — in five words?

We will find out when she testifies before the House Financial Services Committee tomorrow, but for now, here’s what several economists had to say:

“Did I make a mistake” in raising rates? — Gad Levanon, managing director of macroeconomic and labor market research at the Conference Board. (His answer, which he also thinks is Yellen’s answer, fyi, is “I don’t think so.”)

Yellen’s Fed is data dependent, Samana says, and she is likely to point to a lot of data showing the markets are not the economy. “You’ve got a labor market that’s pretty healthy, you’ve got additional wage gains, inflation that’s pretty benign, a housing market that continues to rebound from crisis lows, you’ve got consumer sentiment that’s still at a pretty good level.”

Markets are upset about corporate profits which aren’t so good, said the Conference Board’s Levanon, but that’s different from the economy:  “This turbulence will pass.”

Yellen may also point out to Congress that the Fed’s own models show the chances of recession in 2016 are about three to five percent, according to Dekaser.

But the sticky sense of gloom on Wall Street is certainly on the mind of Yellen and her compatriots at the Fed.

“I have no doubt,” said Debaser, “that within the Federal Reserve there’s a vigorous debate about the extent to which monetary policy needs to be suboordinate or subservient … to markets.” On the one hand, markets do influence the economy, but on the other, the Fed can’t bail out investors just because they’re having a bad time.

Decision-makers at the Fed “don’t want to basically underwrite portfolio managers,” he said.

In all likelihood, these economists said, the Fed may give it a few more months before raising rates again.