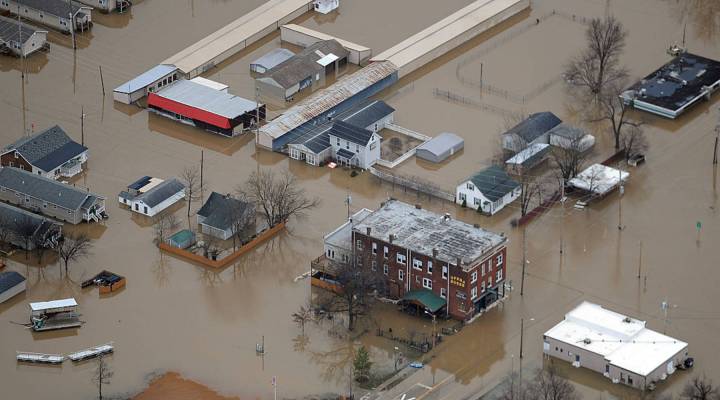 COPY
Residents and business are seen submerged in flood water from the Meremac River on December 31, 2015 in downtown Pacific, Missouri. The St. Louis area and surrounding region are experiencing record flood crests of the Mississippi, Missouri and Meremac Rivers after days of record rainfall. Michael B. Thomas/Getty Images

Residents and business are seen submerged in flood water from the Meremac River on December 31, 2015 in downtown Pacific, Missouri. The St. Louis area and surrounding region are experiencing record flood crests of the Mississippi, Missouri and Meremac Rivers after days of record rainfall. Michael B. Thomas/Getty Images
Listen Now

On a particularly chilly afternoon before New Year’s Day, residents of Pacific, Missouri got in their cars and drove to a hilltop park. What they saw was startling: Floodwaters from the Meramec River submerged a big chunk of the city’s residential neighborhoods and an even larger swath of the business district.

About 7,000 people live in Pacific. And from this vantage point, residents saw floodwaters overtake scores of homes, restaurants and a historic opera house that’s now an events center.  Carolyn Davis has lived in Pacific for a long time, and she said it was hard to take in what she saw across the horizon.

“Breaks your heart a little bit,” Davis said. “You know you’re looking at landmarks that have never been under – the opera house or the florist shop that’s been there forever. You know restaurants – families and people. It’s just crazy.”

Flooding in Missouri reached historic levels at the end of last year. It was especially acute in the St. Louis region, where floodwaters caused hundreds of millions of dollars in damage to homes and businesses. While some officials blame the floods on Mother Nature, others contend bad public policy decisions made things worse.

“I do not believe that this has got to be a perfect world of us to not be stupid,” Criss said. “These are flood plain areas. They are well mapped. People realize the risk of these areas.”

Criss has studied flooding in the St. Louis area for years. He’s critical of how some communities erected levees – artificial embankments aimed at stopping a river from overflowing. Criss contends these structures mess up the way rivers flow. They may block water from flowing into one community, only to be pushed into another. And, Criss said cities behind levees converted flood plains into large residential and retail developments.

“We just have to avoid putting more buildings in harm’s way,” Criss said.

Those buildings took away grassy fields to soak up water. Criss said this leads to more destructive flooding.  “There is nothing mysterious about what’s going on,” he said. “It just mystifies people with a peculiar point of view.”

One person who differs from Criss is Missouri Gov. Jay Nixon. The Democratic official said the recent flooding had nothing to with dikes, dams or levees. “It happened because a unique weather pattern dropped over 10 inches of rain in a short period of time in hill country with thin soil,” Nixon said. “And when that happens, you’re going to have floods.”

Missouri Gov. Jay Nixon says heavy rains are to blame for the flooding.

Still, some government officials believe there are lessons here.  John Posey is the director of research for East-West Gateway.  It manages big projects throughout the St. Louis region. He said it is possible to protect existing development and prevent future flooding.

“When you have an area that’s already populated, a place with a historic downtown or a place with a lot of businesses, it’s really difficult for me to try and second guess that decision,” Posey said. “What I think is important is to hang onto the flood plain that we’ve got.”

One way to do that is to take advantage of federal programs that move places and people off flood plains. U.S. Rep. Rodney Davis (R-Ill.) said that happened a lot in his home Illinois district  – just across the border from Missouri  — and it paid dividends.

“Illinois has taken advantage of moving these structures out of the watershed,” Davis said. “We then have less damage – less structural damages – than I believe you have on the Missouri side.”

St. Louis residents are still picking up the pieces from the flood. But if they decide to move to higher ground, it could provide more space for floodwaters to go – and a little more breathing room for residents of Missouri’s river cities.