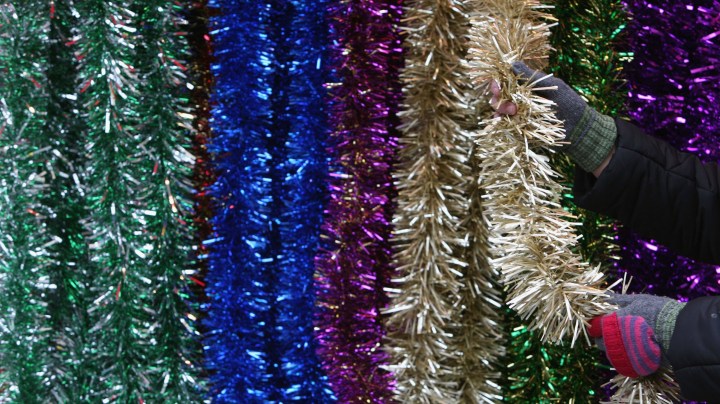 COPY
Matt Cardy/Getty Images
Brought to You By

The closer we get to the holidays, the more you’ll see things shimmer. A lot of that sparkle is from the age-old decoration tinsel. Some think it’s tacky, others love the tradition, which traces its American origins to Philadelphia.

The U.S. birthplace of tinsel is in South Philly. The company Brite Star has manufactured the thin sparkly stuff for three generations now. Judy Kinderman and her son run the company. Her late husband, Sandy, was known as “the Tinsel King.”

“For many, many years, when my husband was very involved in the factory, he would come home and the tinsel icicles would be hanging from his shoes and he’d bring them into the house all the time every day,” Kinderman said.

Those Christmas lights that look like icicles you see hanging from porches everywhere? The family has a patent on that, too.  But the original wispy stuff is still their number one seller. Kinderman said Brite Star still controls 80 percent of the market. “I think it has tapped into a sense of nostalgia, where people today, with all the bells and whistles, and everything is so glittery, we’re still looking for the traditions,” she said.

Tinsel appeared hundreds of years ago in Germany. Back then, it was a luxury good made of real silver. In modern times, the delicate strands were made of lead, until the government declared it a potential hazard to children. Now, it’s made of shiny PVC.

But some still covet the old-school version. “Of course we still have customers who come in to this day and ask for the lead tinsels because they were beautiful on the trees and hung very, very, delicately, but that has changed,” Kinderman said.

Les Gould is the guy to talk to about how the tinsel market has changed. He runs Orman Inc., that sells holiday decorations to 1,500 independent retailers around the country. And tinsel sales have declined.

“I would say, at peak, and to where we are today, our business in that is probably 10 percent of what it used to be,” Gould said. What’s taking tinsel’s place? High-tech decorations, like LED reindeer, and: “these laser light things are very popular right now.”

He’s talking about little devices that shoot an array of green or red laser stars that you can project on your yard. He said they’re especially hot in the suburbs.

Kathy Ducato, of New Jersey, passed by the tinsel while out holiday shopping recently. She thinks tinsel’s kind of tawdry.

“I like ornaments, lots and lots of ornaments. I like bows, and ribbon around the tree, rather than tinsel and garland.” Ducato said. “Yeah, reminds me of when I was a kid, which is nice, but I don’t wanna see it now.”

Brite Star’s Kinderman isn’t too worried, though. She said the company makes enough tinsel every year to string it around the entire globe, and still have a little left over.  The company is still shipping thousands of feet of tinsel every year. There’s an increasingly growing market among web consumers.

“It’s kind of sparkly and shiny and a little bit different. And, you know, obviously draping yourself with tinsel would be a little bit odd,” said Angela Craig of Dallas, Texas.

“When you mix it with other things, and the blend, I think, kinda, maybe brings it to a little bit nicer of a level,” she said.

But to any crafters looking to add to the pages and pages of tinsel oddities found on Etsy, beware: Craig says tinsel has its sharp edges, and can nick you as you weave.