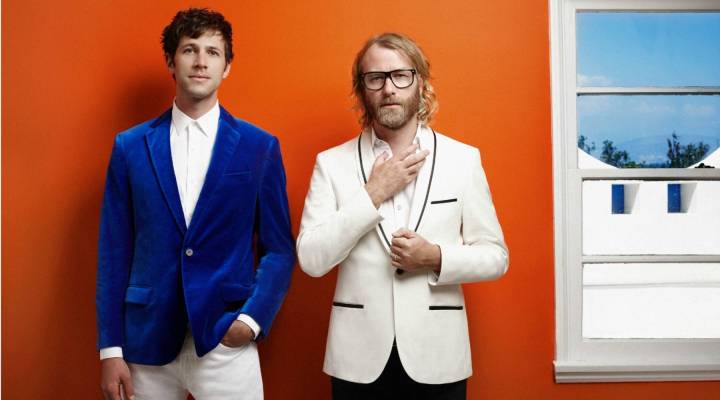 El Vy, members Matt Berninger and Brent Knopf, released their first album “Return to the Moon” recently and took some time out to take our quiz.

Matt Berninger: Fill in the Blank: Money can’t buy you happiness, but it can buy you _____

Brent Knopf: Uh… it can buy…

Berninger: Government. The answer is government.

Knopf: Chocolate. It can buy you lots of chocolate. And I think that’s as close to happiness as anyone can pursue.

Berninger: Incorrect. The answer is government.

Knopf: Oh, because of Citizens United?

Berninger: Yeah. And lawyers. And freedom. And chocolate. But not happiness, unfortunately.

Knopf: How do you get happiness then if you can’t buy it?

Berninger: You have to steal it from your friends.

Knopf: Is that where my happiness went, did you steal it from me?

Knopf: Matt Berninger, in your next life, what would your career be, given that you messed this one up so bad?

Berninger: Uh… I’d like to be a school teacher, actually.

Berninger: Okay Brent, question for you, buckle your seat belts because it’s a hard one. What is the hardest part about your job that no one knows?

Knopf: You mean besides doing all the work? You know what, it’s guest lists. That’s the hardest part actually.

Berninger: Interesting, I was going to say guest lists too.

Knopf: You know, if I mess something up or get a day wrong, then someone feels like I don’t care about them. And that makes me nervous.

Berninger: I have the hardest time picking which friends are the most important and which ones I’m going to let go of, the old ones. Cause now that I’ve gotten to be hot, hot stuff, I’m replacing most of my old friends with newer, kinda cooler ones. Like fancier, like the Biebers, and those guys now.

Knopf: Matthew Berninger, what is something that you bought that you completely regret having bought?

Berninger: I don’t have a lot of regrets but I gotta tell you, vacation hats, I’m gonna go with. And I’m going to tell you what that means. Over the years, even as a young kid, like going on vacations with my family, you’d go to places and you’d feel like ‘Oh, I can buy a cool hat.’ Like for example, when I was a kid I bought a hat that had a parrot on it, I actually thought this would be fun to wear when I got home, or I went to Paris and I bought a beret, you know? And you think you’re going to be able to pull off a beret when you get back to Cincinatti, Ohio, and you just look like a tool. So I have a lot of vacation hats, I’m going to have this fedora and everyone’s going to say, ‘That guy is a little more Indiana Jones than I thought he was. Must be because he took that amazing trip.” But I regret every hat I’ve ever purchased on vacation.