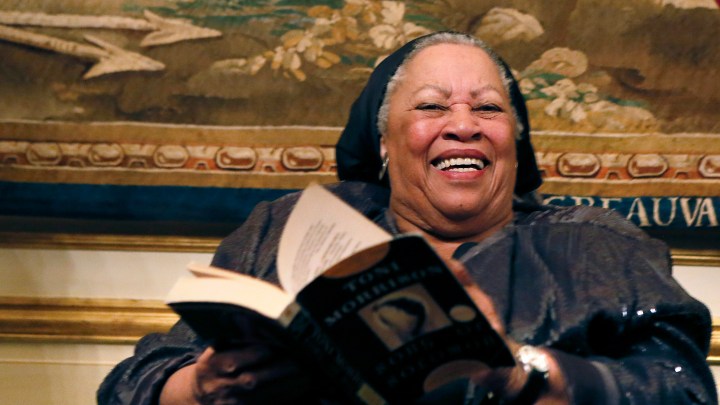 COPY
Toni Morrison poses with her 1977 novel entitled "Song of Solomon" in 2012 during the 10th America Festival in Paris, France. Patrick Kovarik/AFP/GettyImage

Toni Morrison poses with her 1977 novel entitled "Song of Solomon" in 2012 during the 10th America Festival in Paris, France. Patrick Kovarik/AFP/GettyImage
Listen Now

Novelist, editor, poet and Nobel Prize winner Toni Morrison died on Monday at the age of 88. She won the Pulitzer Prize in 1988 for her book Beloved, which was later turned into a movie, and Barack Obama gave her a Presidential Medal of Freedom for her life’s work — decades worth of novels and essays and stories that revealed some of the nuances of black life in America and the sometimes harsh truths of America itself.

Many remember Morrison for her work as an author — she penned novels such as The Bluest Eye, Song of Solomon and God Help the Child. But she also had a powerful impact on the publishing industry.

Toni Morrison was the first African American female editor at publisher Random House, working in that role from 1967 to 1983.

Erroll McDonald is a vice president at Knopf and Pantheon. (Knopf is the division of Random House that published most of Morrison’s novels). He said that at the time Morrison started her career at the company, many of the popular books by black authors fed negative stereotypes about African Americans.

“She changed that in a radical way by insisting on the dignity of writers who theretofore had not had certain opportunities,” said McDonald. “She published some major books by writers such as Muhammad Ali, Angela Davis, Huey P. Newton — books of relevance and of moment that opened the doors for many a writer of color.”

McDonald said Morrison also “normalized” the presence of people of color in a predominately white industry. Even today, the publishing industry is more than 85 percent white, according to a survey by Publisher’s Weekly.

“[Morrison] was a black editor at a primarily white publishing house,” said John Maher, news and digital editor at the magazine. “Just by virtue of being there and voicing her opinion and being involved in the editorial process, she had a big influence.”

“She had blackboards in her office,” he recalled, “and she would have these kind of looping, perfectly proportional, symmetrical letters, and she would write these gorgeous words.”

Jarrett said that when he decided to pursue a graduate degree [Morrison] “agreed to write me a letter of recommendation. And so, if it weren’t for her, I wouldn’t be where I am today.”

Jarrett is now dean of the College of Arts and Science at NYU. He said Morrison inspired an entire generation and laid the groundwork for black writers, especially women, to have a greater profile in the literary world.