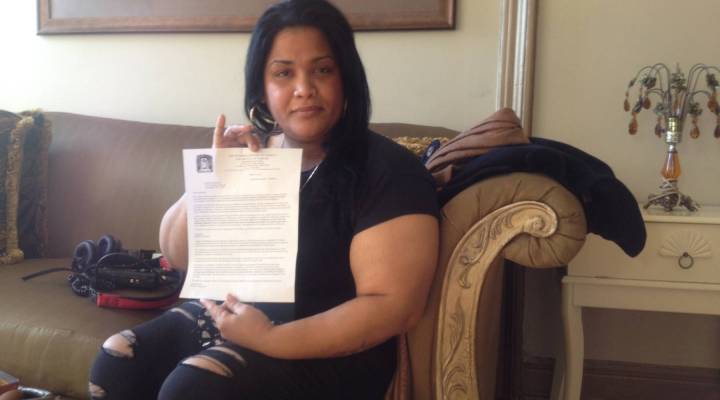 The long wait for Section 8

COPY
Marylene Marrero of Yonkers, NY, with a letter from the city's housing authority informing her she was one of 11,000 people to apply for a Section 8 voucher in a single week in 2012.  Noel King/Marketplace

The long wait for Section 8

Marylene Marrero of Yonkers, NY, with a letter from the city's housing authority informing her she was one of 11,000 people to apply for a Section 8 voucher in a single week in 2012.  Noel King/Marketplace
Listen Now

Marylene Marrero is a 37-year-old hairstylist who lives in Yonkers, New York.  She has spent the past couple of years bouncing from apartment to apartment. In that time, there’s something she has held onto very tightly: a letter from the Municipal Housing Authority of Yonkers, informing her that she is one of 11,000 people who applied for a Housing Choice or Section 8 voucher in a single week in January of 2012.

Marrero, like all applicants, has no idea where she sits on the list, but from what she has heard, her three and a half year wait isn’t especially long.

“Sometimes they come and they talk about it in the salon,” she said. “Or I hear it around friends and stuff, that they’re waiting for 11, 10 years, nine years.”

She earns around $25,000 a year. Recently, she’s been renting a room in the home of one of her customers from the salon.  She pays $500 a month and says the room is sunlit and spotless.

She used to rent an apartment of her own. But then a few years ago she started working at a new salon and lost most of her regular clients. At the same time, the economy took a turn, and her income dwindled.

“People who used to go and get a wash and set every single week, now they wait three weeks,” she said. “People used to tip you $5, now they give you $3.”

She works six days a week and cannot afford an apartment.

Jon Shenk is the special projects coordinator at the Housing Resource Center of Cluster, a community-based service organization in Yonkers. He knows Marylene and says her story is one of 11,000.

“It’s torturous for us to help people apply and know that the only reason they’re waiting is they’re waiting for a limited resource that they’re eminently qualified for,” Shenk said.

And unlike Marylene, many people can’t find a decent place to live.

“They’re paying 50 to 60 percent of their income towards rent, oftentimes for housing that is substandard: old, run-down, or they are doubling up with family friends or others,” Shenk said.

In most places across the country, Section 8 waiting lists are rarely open. When they do open, it’s for a small window of time, and the numbers are daunting.

Joseph Shuldiner is the executive director of the Municipal Housing Authority in Yonkers. That’s the agency that sent the letter to Marylene Marrero.

He has also run some of the country’s largest housing authorities: New York City, Chicago and Los Angeles, so he’s familiar with shortages. He says nationwide only about a quarter of people who are low-income enough to qualify for a voucher, hold a voucher.

“Congress says, ‘Here’s how much money you have,'” Shuldiner said. “When Congress says this program gets $3 billion and the average cost of a voucher is whatever, and you divide into it — that’s how many vouchers you have.”

Shuldiner is frank about the program’s limits.