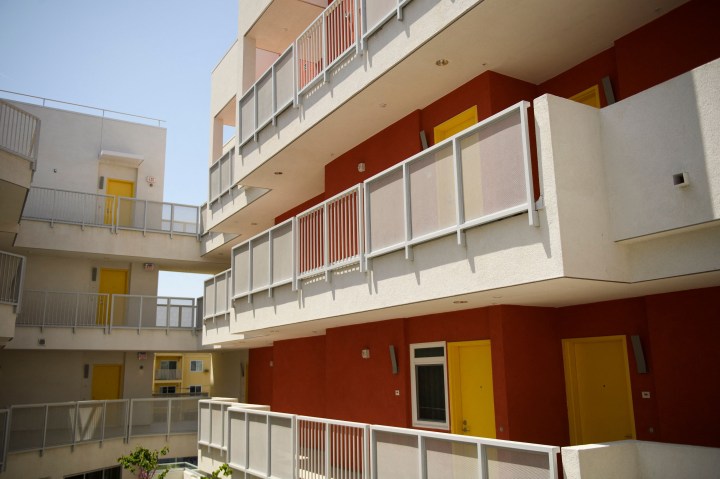 An apartment complex in Los Angeles where homeless people are being housed. Some states have longer eviction bans than the federal government, whose moratorium ends July 31. Patrick T. Fallon/AFP via Getty Images

An apartment complex in Los Angeles where homeless people are being housed. Some states have longer eviction bans than the federal government, whose moratorium ends July 31. Patrick T. Fallon/AFP via Getty Images

A federal order to extend the country’s eviction moratorium will remain intact after a U.S. Supreme Court decision Tuesday.

The Centers for Disease Control and Prevention extended the ban on renter evictions from July 1 to July 31. However, landlords and real estate companies attempted to block the order, which the court denied in a 5-4 vote.

In a statement about its order, the CDC explained that the pandemic poses “a historic threat to the nation’s public health.”

“Keeping people in their homes and out of crowded or congregate settings — like homeless shelters — by preventing evictions is a key step in helping to stop the spread of COVID-19,” the CDC said.

More than 6 million U.S. households were behind on their rent at the end of March, according to the Department of Housing and Urban Development.

Here’s a look at who qualifies and how much funding Congress has allocated to address the country’s eviction crisis.

Does the moratorium apply to everyone?

While the CDC has extended the moratorium for all U.S. households, some states have set their own deadlines.

Washington and California have extended the deadline to Sept. 30, and Oregon has a 60-day eviction delay for renters who apply for assistance and notify their landlords.

California’s policy goes further, freeing up $5.2 billion to cover the entire amount of back rent that tenants owe.

Who qualifies under the CDC’s moratorium?

The CDC has outlined several criteria, which include the individual having made his or her “best efforts to obtain all available government assistance for rent or housing.”

Flora Arabo, national senior director of state and local policy at the nonprofit Enterprise Community Partners, said tenants also have to invoke their rights by signing a CDC declaration form.

“So it’s not just an automatic or blanket moratorium,” Arabo noted.

How much money has Congress allocated to the problem?

Congress has approved a total of $46 billion in emergency rental assistance to help landlords and tenants during the crisis since December. However, much of that money has failed to reach them. The recent extension will give state and local governments more time to distribute the funds.

Some states only started accepting rental assistance applications at the end of May, and some as late as June 1. As a result, the Treasury expects state and local programs to “deploy more rental assistance in July than in any previous month,” according to the CDC’s order.

Andrew Aurand, vice president for research at the National Low Income Housing Coalition, told Marketplace that many programs once stipulated that they wouldn’t provide assistance to tenants if their landlords refused to participate. However, the Treasury Department changed its guidance in May, requiring programs to help qualified tenants without their landlord’s participation.

Another issue with the distribution of the first round of funds, Arabo pointed out, is that it was based on population as opposed to need. She said some parts of the country — like Los Angeles — had to shut down their application process because they were oversubscribed. On the other hand, she thinks other parts of the country will end up returning some of their money.

Are resources available for those who face eviction or have trouble paying rent?

Arabo said rental assistance is being administered through state and local housing departments, so you should check the website of your area’s housing agency. If you live in California, for example, you can apply for rent relief here.

The Treasury Department has compiled a list of websites that allow you to find rental assistance programs, which you can filter by city, county and state.

Are there permanent solutions to the country’s eviction crisis?

Paula Cino, a vice president with the National Multifamily Housing Council, told Marketplace that the Section 8 federal housing program, which provides rent vouchers, should be expanded. Alicia Mazzara, a senior research analyst at the Center on Budget and Policy Priorities, noted that there was already a long Section 8 waiting list prior to the pandemic.

Arabo said the events set in motion by the pandemic showed the country it needs to be able to ramp up programs like emergency rental assistance quickly and effectively.

“I really hope that some of what we implemented during COVID will stick around for the long haul,” she added.

What you need to know about the CDC eviction moratorium