Taxi and Uber fight for the curb at Atlanta airport

Taxi and Uber fight for the curb at Atlanta airport

Scott Ledford got the cabbie gene. His grandfather founded Atlanta Checker Cab Company, his father worked there, and now his cousins run the business, he said. “I kinda have it in my blood.”

When Ledford drives past the curb at the Atlanta airport he sees passengers waiting for friends, family and sometimes Uber drivers. But not taxis. Ledford and other cabbies have to wait in a line nearby.

Airport curbs are one of the remaining battlefields in the fight between Uber and taxi drivers, and passengers traveling the final few miles to their families for the holidays are hotly contested business for the car services.

O’Hare in Chicago and Reagan National in Washington, D.C. allow ride-share companies to pick up passengers. But Hartsfield-Jackson in Atlanta, which is the nation’s  busiest airport according to the Federal Aviation Administration (FAA),  still doesn’t.

Atlanta city government and airport officials could change that soon. It’s also illegal for ride-share drivers to pick up passengers along the curb. Lyft drivers tend to stay away from the airport, because the pink mustaches on their cars give them away. But some Uber drivers still stop for passengers there.  That bugs Ledford, and he’s worried if the rules change, there will be traffic jams.

“See and it gets crowded when it’s real busy,” he said, while driving by the curb. “And for them to come in here too. It really would add to the congestion.”

But Denise Edwards, a driver for Uber, has a different perspective. “If I could pick up them up from the airport that’s all I’d do,” she said.  “The other rides I wouldn’t do them.”

She estimated she’d make around $150 extra a day if she was allowed to pick up passengers at the airport.

“If they open the airport for us to go out there. I could make…oh my God! Within four hours I’m done,” she said.

But Ledford said  if that happens, he’s worried the whole ride service industry would go under. There would just be too many drivers at the airport, one of the best places in Atlanta to meet passengers, he said.

“Uber’s hired so many drivers it’s going to be hard for anybody to make any money,” he said.

Many of those Uber drivers, like Edwards, aren’t on the road as much as a typical cabbie. She’s a stay-at-home mom who lives near Atlanta’s airport.

Airports in some cities have special zones where Uber drivers can meet passengers, and they block the app from everywhere else at the airport. Edwards said that would slow things down even more.

“I think they should keep it the way it is. Don’t put an area for the Uber people. Just let it be fair game. Whoever they call, and whoever they get there. That’s who you go with,” she said.

Joseph Schwieterman, a transportation professor at DePaul University in Chicago, said if Atlanta officials allow ride-share drivers to make pick ups at the airport, there’ll be more congestion. But, that might not matter to passengers.

“I think a lot of people are saying that a little congestion at the airport is a small price to pay for giving people that demand responsive service that gives them a better experience,” he said.

And city officials say passengers are the priority. That means cabbie and Uber drivers could end up in long lines when Atlanta and airport officials decide on new rules in the coming months.

The question is whether ride-share drivers, or cabbies, will have a harder time finding their place, and their passengers.

The cabbie Scott Ledford seems prepared for whatever comes.

“Got to make it work for all of us I guess somehow; we’re all going to find our place in this world,” he said. 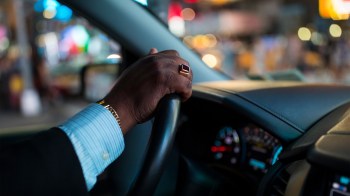