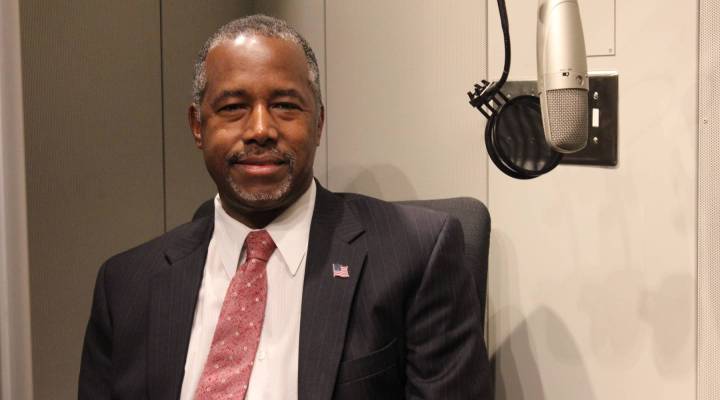 Dr. Ben Carson on the economy, taxes and debt

Dr. Ben Carson on the economy, taxes and debt

In one of his only in-depth interviews about the economy, retired neurosurgeon, author and Republican presidential candidate Ben Carson laid out what he sees as the biggest economic issues facing the country, and his ambitious plans to address them.

“It’s not that difficult,” he said in an interview Monday. “If we simply refuse to extend the budget by one penny for three to four years, you’ve got a balanced budget — just like that.”As president, Carson said he would shrink government through attrition, making cuts across the board, having every department head reduce their budget by 3 to 4 percent and implementing a 15 percent flat tax.

On health care, Carson said he would not roll back the Affordable Care Act and take away health care:

No. We need to take health care out of the political realm and actually come up with something that actually works, and I have proposed a system that actually works.… It will provide much better coverage than they have right now and they will not be second-class citizens.

On what he sees as the biggest economic issues facing our country – debt and income gap:

You see, the buying power of the middle-class and poor people going down. These things are increasing the gap. When people come along and say, ‘it’s the rich people. It’s their fault, and if we can take their money and redistribute it, somehow that’s going to solve the problem,’ that’s an emotional argument and it appeals to our lower elements but has nothing to do with reality…. Those are the kind of things that are killing the poor and the middle class. It’s those silly asinine policies. It’s not because of rich people.

On international relations under Carson’s leadership:

You’d see much more proactive stance toward someone like Putin. We’re going to be much more active throughout the whole Baltic basin area, Eastern Europe, we’re going to re-establish a missile defense program, we’re going to have more than one or two armored brigades in that area. We’re going to use our energy resources in an appropriate way … to make Europe dependent on us for energy rather than Putin. Put him back in his little box where he belongs.