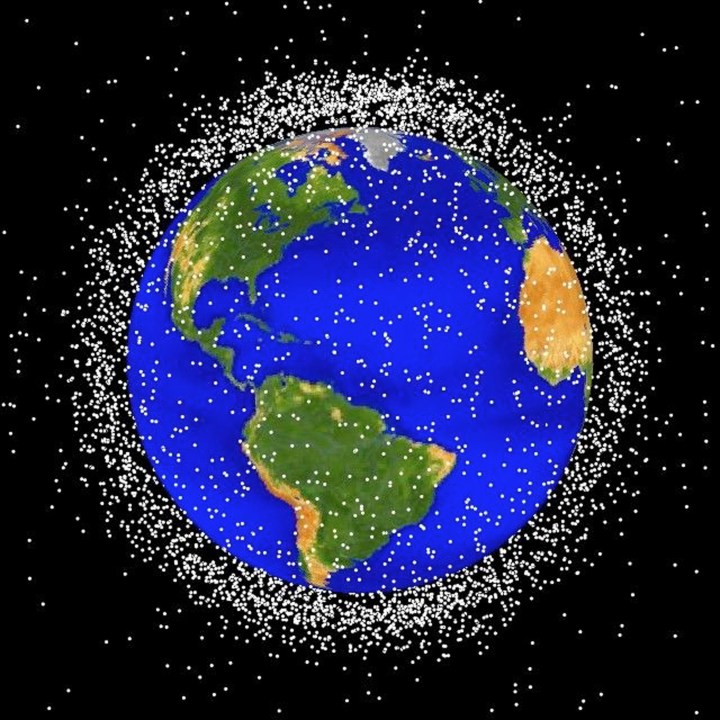 What to do about all that space junk? Cue the lasers

COPY
GRAPHIC - (CIRCA 1989): This National Aeronautics and Space Administration (NASA) handout image shows a graphical representation of space debris in low Earth orbit. According to the European Space Agency there are 8,500 objects larger than 10 cm (approximately 3.9 inches) orbiting the earth and 150,000 larger than 1 cm (approximately 0.39 inches). Photo by NASA/Getty Images

What to do about all that space junk? Cue the lasers

GRAPHIC - (CIRCA 1989): This National Aeronautics and Space Administration (NASA) handout image shows a graphical representation of space debris in low Earth orbit. According to the European Space Agency there are 8,500 objects larger than 10 cm (approximately 3.9 inches) orbiting the earth and 150,000 larger than 1 cm (approximately 0.39 inches). Photo by NASA/Getty Images
Listen Now

In the Japanese anime “Planetes,” the year is 2075 and teams of low-paid astronauts work to clean up space debris orbiting around the earth. Although the story is fictional, the issue is real. Orbital debris has been a problem for a while, but as it gets worse, scientists are posing some interesting solutions. Some of them sound like they come straight out of science fiction.

Tens of thousands of pieces of orbital debris — or “space junk” — are zooming around the planet at about 17, 500 miles per hour and posing a risk to the International Space Station and the satellites on which many of us depend. And that tally only counts debris bigger than a softball. NASA estimates there are at least half a million smaller bits.

“Something even the size of a marble traveling that fast, if it were to collide with an operational satellite, would certainly disable it,” said Raymond Sedwick, an aerospace engineer and director of the University of Maryland’s Center for Orbital Debris Education and Research.

It’s happened to satellites a couple of times already, and astronauts sometimes have to move the ISS out of the way or shelter in place. That happened as recently as July of this year.

Right now, the main strategy for dealing with space junk is tracking and avoiding it.

“So the majority of what is being done falls on … trying to see where the objects are, trying to predict where they’re going to be in the future,” Sedwick said.

Usually, it’s too expensive to move satellites out of the way, so the owners just hope. There are also international standards for limiting the amount of debris left behind in space. That’s the prevention side, but what about actually cleaning up all the space junk?

Claude Phipps is the founder of Photonic Associates in Santa Fe, New Mexico, and his idea is to use special ultraviolet lasers to push the smaller debris out of orbit.

“It’s not totally obvious,” he said, “but if you shine a pulse laser on a surface … you can make a flash on it, and that flash is a jet.” Phipps said enough of those flashes will slow the fast-moving objects.

“In the case of debris,” he went on, “you only have to slow it down just a percent or so of its own velocity before it’ll re-enter and burn up in the atmosphere.”

Phipps says a space-based laser will work for smaller debris, but bigger pieces and intact but inoperable satellites might need to be hauled to a spot where they can fall into the atmosphere and burn up. But who’s going to pay for it?

Chris Johnson is a space lawyer — yes, that’s a real job — for the Secure World Foundation.

“Governments are internationally responsible for their space activities, and they’re potentially liable for any damages that their national space activities cause,” he explained. That means anything that launches from a country is ultimately the responsibility of that country. Therefore, that nation would be liable if its space junk damages something.

Johnson gave the example of China, which decided in 2007 to show off its anti-satellite missile by blowing up one of its satellites—creating thousands of pieces of debris. In theory, China would be liable for any damage caused by that debris, although good luck collecting on that one, Johnson said.

But, according to Johnson, there is incentive for countries and companies to get more involved in orbital cleanup before there’s an accident.

“If you look at what space debris actually is,” he said, “you see that it’s high-grade refined metals that we’ve already launched and put into space. That’s a resource that entrepreneurs may might look at as a resource that they can draw from.” He envisions 3-D printers in space that can recycle debris into useful objects that can support operations in space.

But right now, cleanup isn’t really a priority for companies and governments going into space. Phipps, of Photonics Associates, said he knows why.

“The bottom line is so far the cost of tolerating the debris is less than the cost of dealing with it.”

That is, of course, until a major communication or military satellite ends up out of commission because of a stray screw.