For Lego A/S, everything is, in fact, awesome.

The company posted double-digit growth in the first half of this year, according to a report released Tuesday. Revenue was up 23 percent over the first half of 2014, when the brand was already enjoying a big boost from “The Lego Movie.” Net profits were up by 31 percent, the company said, helped along by the weak euro and kroner. In fact, currency fluctuations alone accounted for a 5 percent jump in sales, though even without that, the results are impressive. 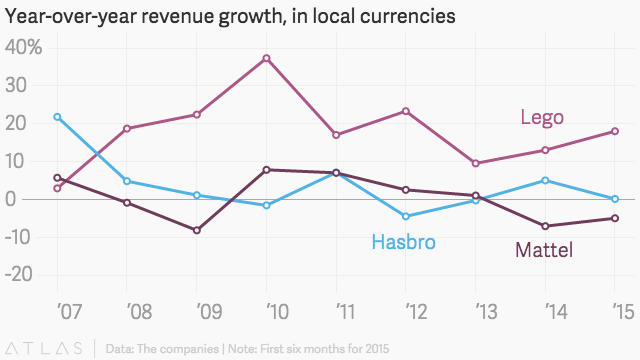 What’s behind all this growth? Lego’s perennial lines are still huge sellers, and its more recent “Ninjago” line — complete with a character named Kai, by the way — has been a runaway success, getting its own movie in a couple years along with “The Lego Movie 2.” Lego also pointed to big sales for its new “Elves” sets and another huge movie tie-in: “Jurassic World.”

This year will likely only get better for Lego. A new video game “Lego: Dimensions” comes out this month, along with the first wave of sets tied to December’s new “Star Wars” movie. The line was already a bestseller in the decade since the last movie came out, and with Disney planning a new “Star Wars” movie a year, there will be no shortage of ships, characters and scenes getting the Lego treatment.

Compare all this to about a decade ago, when Lego nearly went out of business. In 2013, we spoke with David Robertson, who wrote the book on Lego’s turnaround. The company had lucrative licences to make sets based on big movies, he said, but when “Harry Potter” wasn’t in theaters, sales were stalling.

Part of Lego’s turnaround came from new management, Robertson said, and rediscovering why the toys were beloved in the first place.