Katrina kid: Growing up after the flood

Katrina kid: Growing up after the flood

It’s been 10 years since Hurricane Katrina and the flood-of-floods struck New Orleans. In the following decade, the city has transformed it public schools, housing, and business community. Marketplace Morning Report host David Brancaccio traveled to the city to explore what these vast changes mean for New Orleans and the country.

In the chaotic semi-school year that was just underway when Hurricane Katrina and the resulting flood hit New Orleans, a lot of instructional days simply disappeared. The storm made such a hash out of his seventh grade, Domonick Foy had to start all over again the next year, in one of New Orleans new charter schools, which were rapidly replacing all of the city’s failing public schools.

“Before Katrina, I finished the year off in sixth grade with a 3.0,” Domonick said when we met him at age 13, in 2006, while reporting for NOW on PBS.

“When we went to a different school, I was passing everything except math. I’m trying to repeat the seventh grade, so maybe next year they can put me in my right grade, so I can go to high school.”

The storm put 8 feet of water into the house he and his mom, Karen, shared in New Orleans’ Hollygrove neighborhood. Living in a FEMA trailer, he found himself back at his old school, Lafayette Academy, which had been transformed into a charter. In its first school year, it turned into a new kind of mess.

“I felt like they did as much as they were able to do, but as far as us as students, it wasn’t fair to us. It’s not like we really learned anything,” Domonick, now 21, recalls of his seventh grade year. “We didn’t have text books at all that year.”

He and his mom decided to leave Lafayette Academy for a different school in eighth grade, before he finally settled down at Warren Easton for high school. Though it was a time of turbulence, football and academics got Foy through the transitions.

“I played football from my freshman year to my senior year. I started all four years,” Domonick says. “In high school, I was so good at what I did, to a point where I never really studied, and I still was making good grades. So when I got to college, it was kinda like shell shock, because I never did that before, and I had to do it then.”

After some first-year bumps at his college in California, Foy finished his sophomore year strong. He’s planning to complete college in Oklahoma at Langston University, where he’s leaving himself several options for the future.

Foy with the trombone he used to play in high school.

“Every football player is gonna say, I’m going to the NFL, I’m going first round, I’m gonna get drafted,” Domonick says. “If that happens, cool, but if it doesn’t, I’ll have my degree in kinesiology, so I can always go into physical therapy, occupational therapy, sports medicine.” Though his mother misses him when he’s away from New Orleans during the school year, it’s also a weight lifted from her mind.

“I worry, you know. We have so much going on now with the crime,” she says. “On the news, I wake up and I hear, oh this 21-year-old, and then you go into this panic mode. It’s like, I need to hear from my son.” Domonick sees the risk of violence too and thinks things have gotten worse since the storm.

“No killing is justified, but before Katrina it was drug wars, those were the people that were getting into it,” he says. “Now its like babies, all kinds of stuff that’s going on that never went on before Katrina, that’s constantly going on, its not like a one-time thing.” 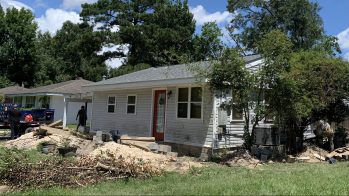 What does it take to lift a house? A lot of money, sweat and hydraulic jacks. 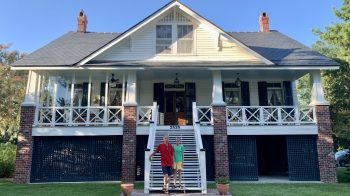 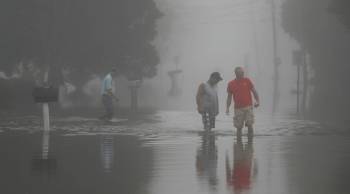