Late night TV is increasingly not on TV, or even on at night. In the past year nearly every major player — CBS, NBC, Comedy Central — have seen host shake-ups, with more on the way. HBO and Netflix are joining the fray and, as the New York Times points out, competition is stiffer as more viewers aren’t bothering to stay up and watch anymore.

Instead, shows are fighting for viewers online, and some are performing better than others. To find out just how much better, we looked at each major late-night show’s ratings last quarter and their most successful videos on YouTube. It’s not a perfect measure — nearly all shows also host clips on their network’s website, and on Facebook — but a pattern starts to emerge: younger shows are increasingly finding what works online. Often that’s celebrities being silly, and they’re reaching far bigger audiences because of it.

Here’s how all the shows stack up:

After a year on-air, Fallon’s “Tonight Show,” dominates late-night TV in Nielsen ratings and YouTube views. Much of this online success comes from several recurring segments, online-only musical performances and nostalgia-fueled stunts, like reuniting the cast of “Saved by the Bell.” The show’s celebrity “lip-sync battles” have racked up some 165 million views for “Tonight,” and Spike has its own, seperate show based on the concept.

“The Late Show with David Letterman”

Interestingly, Letterman had his biggest viral success just last week, when Tina Fey shed her fancy dress during an interview to say goodbye to the retiring host. The video has quickly lapped the show’s most successful videos several times over. The only “Late Show” segments that have come close are other bits of planned spontaneity, like a particularly frenetic musical performance, a Robin Williams tribute or when Letterman announced his retirement.

This one comes with a little asterisk: Kimmel’s most popular YouTube video is actually a relatively-ancient 2010 clip in which he has Justin Bieber come on the show to surprise a young fan. It was huge views spike for “Jimmy Kimmel Live,” which the show has only started to match recently. Let’s chalk that one up as a fluke of the rabid Beiber fandom and look at the rest of Kimmel’s big viral hits, which all involve crying children and celebrities saying terrible things about themselves.

The show’s “Celebrities Read Mean Tweets” videos have together racked up more than 355 million views. Kimmel’s now-annual compilations of children hearing their parents ate all their Halloween candy have been a huge success as well. Only these recurring segments have started to match Kimmel’s early success with Beibs.

Like Letterman, Conan O’Brien’s show is a little more old-fashioned, with fewer recurring segments featuring celebrities. His show’s most popular videos involve going on goofing around outside the studio with his guests, like visiting a Korean Spa with actor Steven Yuen, playing video games with Marshawn Lynch and looking for dates with Dave Franco.

Seth Meyers’ “Late Night” mostly posts clips from celebrity interviews, which rarely reach a million views. The few that have are with Internet darlings like Jennifer Lawrence, Taylor Swift and Kanye West. The show does several pre-taped segments reminiscent of “Saturday Night Live,” as well as live performances of actual cut “SNL” sketches, but only one has been a bonafide hit.

A month and a half in, the new “Late Late Show” has started off strong, beating out time slot rival “Late Night” with a couple of videos that seem likely to become recurring bits over James Cordon’s run as host. One has actors rapidly revisit all of their major roles in front of a green screen, and the other puts Cordon in the car, singing along to the radio with Mariah Carey.

A short history of the post-Super Bowl TV show 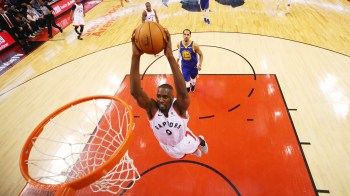