A new app from the ACLU of California promises to allow anyone to record video of officers and have it automatically uploaded to the agency’s server.

The app also offers a function to alert other app users nearby if there’s an incident with police that someone believes requires more witnesses.

The ACLU of California launched the mobile app for Apple and Android phones last week. The group says it has so far been downloaded 40,000 times, more than a similar app from New York’s ACLU, which has been available for several years.

Peter Bibring, senior staff attorney with the ACLU of California, says the app’s relative popularity has to do with high profile police use-of-force incidents in recent months that have been caught on phone cameras.

“We’ve seen…incidents where officers took a cellphone and deleted video, and so this provides some measure of protection against that,” he says.

Bibring says this ACLU app isn’t the first of its kind, but it’s been tweaked to be more specifically geared towards documenting incidents of misconduct. The app allows for longer video recordings than previous versions. It also has a library of information about citizens’ rights in documenting police officers in public places. Bibring says the ACLU gets questions regularly about what those rights are.

“It’s not a brand new trend, but it’s absolutely a growing trend,” says Jocelyn Simonson, who teaches law at NYU, and has research that will be published in the California Law Review in early 2016 that looks at the growing trend of citizens’ oversight over police in public places.

“Part of what we’re seeing is a change in the recognition that filming police officers is an important thing,” Simonson says.

But the ACLU’s app may be going in the wrong direction, says Christine Cole, executive director of the Crime & Justice Institute at the Boston-based group Community Resources for Justice, a non-partisan think-tank that focuses on social justice issues.

“This tool actually exacerbates the divide and makes it feel like us versus them,” Cole says. Nevertheless, she says, police and communities must both learn to deal with increased scrutiny on camera. 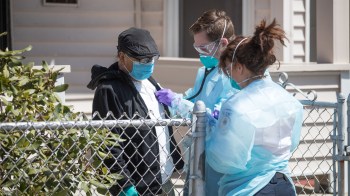