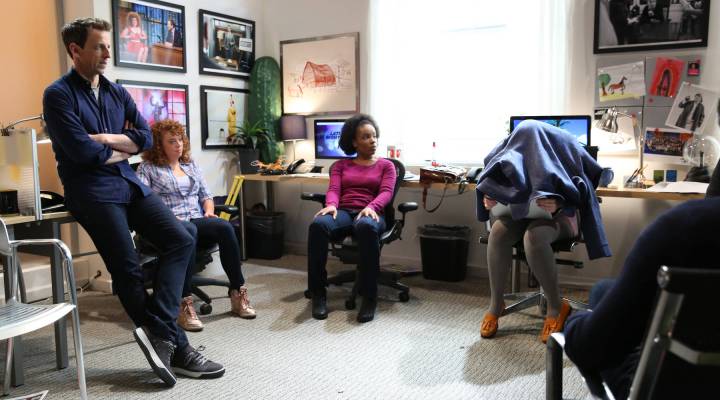 Seth Meyers is getting the hang of his new gig

COPY
Seth Meyers (L) in a skit imagining if Hannah Horvath (played by Lena Dunham) from the HBO show "Girls" joined the writer's room. Dunham is underneath the jacket. NBC

Seth Meyers is getting the hang of his new gig

Seth Meyers (L) in a skit imagining if Hannah Horvath (played by Lena Dunham) from the HBO show "Girls" joined the writer's room. Dunham is underneath the jacket. NBC
Listen Now

Hosting “Late Night” on NBC wasn’t Seth Meyers‘ first time in the host chair — he’d anchored “Weekend Update’ on “Saturday Night Live” since 2006, where he was also a head writer and cast member. “Late Night with Seth Meyers” premiered in February of 2014. After a year’s worth of shows, Meyers has gotten the hang of his new gig.

“When I look back at where I was a year into my time at ‘SNL,’ I felt very uncomfortable, very on-edge. Like a lot of people at ‘SNL,’ I feel like you are worried you’re going to get fired everyday. I’m more settled than that, but I wouldn’t call myself completely settled,” he says.

Late night television is a crowded field. The traditional late night giants, CBS and NBC, have been joined by cable networks like Comedy Central, TBS, and HBO. Meyers is quick to point out that he’s in no rush to copy what his competition is doing on other networks.

“Usually, the people that are doing things really well are doing them for the reason that they are the person that does them best,” he says.

Seth Meyers’ desk in his office at 30 Rockefeller Center.

Meyers and his writing team see their niche in politics, a topic Meyers is comfortable covering after his time at “SNL,” but one that most other late night network talk shows avoid. “It gives the office a fun energy when you’re doing something day of, and you have a lot less time to road test it,” he says, referring to a sketch his team did about Senator Elizabeth Warren and her decision not to run for President.

“And I think as we get into the political season where there are more stories that our audience is hip to, I think we’ll try to do that more and more,” Meyers says. “It’s really fun for us.”

And Meyers is definitely having fun.

“The very fact that, in this day and age, a network has said to me, ‘Hey, we’re going to give you an hour every day. Do with it what you will.’ There’s really not much more you can ask for than that.”

Click the media player below to hear an extended version of our conversation with Seth Meyers: