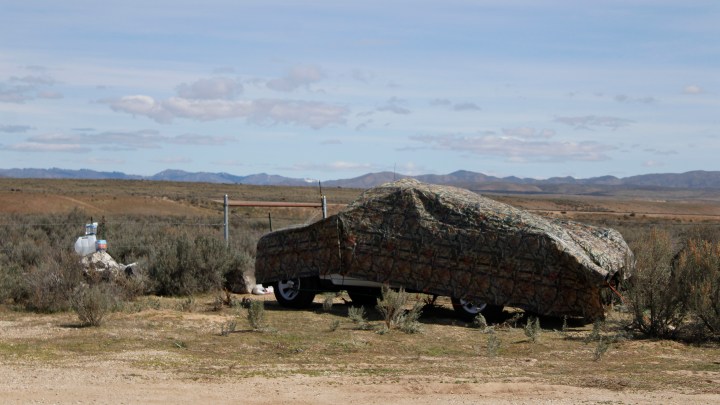 COPY
A vehicle parked on land managed by the Bureau of Land Management outside Boise, Idaho. BLM officers say this is a typical setup of those living on public lands. Madelyn Beck/Mountain West News.

A vehicle parked on land managed by the Bureau of Land Management outside Boise, Idaho. BLM officers say this is a typical setup of those living on public lands. Madelyn Beck/Mountain West News.
Listen Now

Jonathan Jay Meyers used to sleep out by the river in Boise, Idaho, because he said no one was telling him what to do there.

“I could drink as late as I wanted, get up whenever I wanted, drink again,” he said. “So for me, it was because of my addiction.”

Meyers said that’s not the only reason people sleep outside, though. Others who stay in parks or on publicly managed lands simply can’t afford to live in town anymore.

“I think it’s got to be to higher, higher prices, higher costs of living. It’s just — people can’t do it,” he said.

Meyers is in recovery, starting a new job and staying at a shelter in Boise, Interfaith Sanctuary. But he said he’s been on a waiting list for affordable housing for two years and suspects he’s still behind about 300 others.

“I was 300 and something a year ago, and I don’t know if I’ve gotten anywhere on that list,” he said, adding that he’s a lot better off than others. “There’s other people that are around 2,000.”

“[Meyers] and many others who are working and living in our shelter, they have savings. They have incomes. We can’t find housing for them. It’s really frustrating,” she said.

It’s even harder to find places for families to go because they often can’t stay together in shelters. Peterson-Stigers said her hotel program has a waiting list that’s 180 families long — and it’s growing alongside the number of evictions.

“There’s not the beds available for those people being forced out of housing. And so when the weather’s like this, they’re going to find other options right now.”

Options include public lands where people can camp. For example, open fields just outside Boise that are overseen by the Bureau of Land Management.

According to Bureau of Land Management officer Bryan Adams, a lot more families are living in these undeveloped, open spaces.

“And seeing the kids in that situation, it’s heartbreaking,” he said. “They shouldn’t be worrying about housing issues when you’re 6 years old. You should be worried about playing.”

Adams said he’s seen about a 10-fold increase in people living on these public lands in the last few years. Some undeveloped camping areas have even shut around the Mountain West because of too many campers and people trying to live there.

That includes areas of the Arapaho and Roosevelt National Forests in northern Colorado.

Reghan Cloudman, a spokesperson for those national forests, said safety is an issue, too. What if officials can’t communicate with people in the woods that a wildfire is headed their way? Or what if they start a fire?

“Just the increase of abandoned campfires that we’ve seen is definitely a concern,” she said. “Everybody ends up being impacted by severe wildfires.”

There was a spike in the number of people living on public lands around 2008 during the Great Recession too, according to Becky Andres, the Idaho state chief ranger for the BLM.

She noted a group that was overstaying camping limits in a trailer recently. It was in great condition, and had been there about two months.

“We’ve been patiently working with them as they work through their situation and try to find more sustainable housing,” she said.

Public lands agencies do their best to keep campsites clean. But they are concerned about human waste, land overuse and garbage. Human waste is one of the reasons camping rules changed around Jackson, Wyoming, in the ’90s, according to Mary Cernicek, a Forest Service spokesperson with Bridger-Teton National Forest. Stays on those forest lands near Jackson are now limited to five days, she said

“And after that, our regulation says that the person then must vacate for 30 days before he or she can return to the area.”

“As a land management agency, the Bridger-Teton is responsible to solve problems associated with resource impacts and public safety. It is not to provide alternatives for communities for housing,” Cernicek said.

Other land managers, like Andres in Idaho, are asking for more social service agencies to work with them to help people find housing and keep lands clean.

“I really hope that we can educate our public and our society to understand that it’s a difficult situation for everybody,” she said.

This story was produced by the The Mountain West News Bureau.