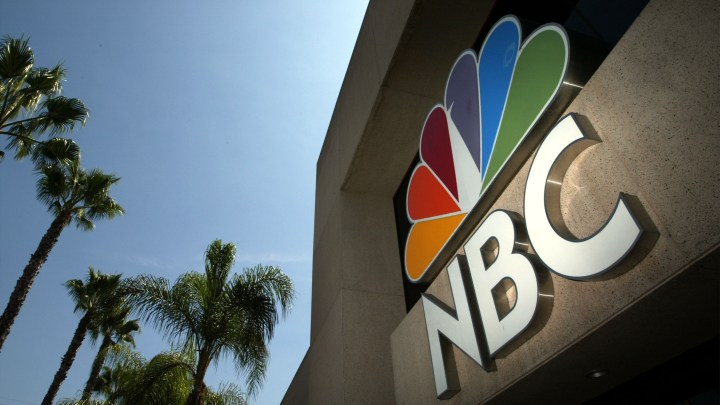 COPY
The NBC peacock logo is seen on the NBC studios building August 28, 2003 in Burbank, California. Paris-based Vivendi is in the final stages of a long and drawn-out auction of its U.S.-based media assets, collectively known as Vivendi Universal Entertainment, or VUE. NBC is an auction favorite. David McNew/Getty Images

The NBC peacock logo is seen on the NBC studios building August 28, 2003 in Burbank, California. Paris-based Vivendi is in the final stages of a long and drawn-out auction of its U.S.-based media assets, collectively known as Vivendi Universal Entertainment, or VUE. NBC is an auction favorite. David McNew/Getty Images
Listen Now

Big media companies continue to fight for the attention of so many people holed up at home. This week, NBCUniversal gets serious with its new streaming video service called Peacock, available free starting Wednesday to people who pay for Comcast Xfinity internet or TV. Everyone else who’s interested can join in July, with a variety of membership options from free to $9.99 per month.

Peacock will feature a library of NBCUniversal content, from shows like “The Office,” to movies like “Jurassic Park.” Users will also get early access to late night shows with Jimmy Fallon and Seth Meyers.

But when it comes to original content, “the fact of the matter is right now Peacock doesn’t have many new feathers,” said Dominic Patten, senior editor and chief critic for Deadline.

He says due to production delays caused by the coronavirus some show launches have been pushed back.

The service will also be lacking what would have been a major selling point this summer with the postponement of the Olympics.

But Peacock could be on to something by bundling the streaming service with a traditional cable package says Michael Pachter, an analyst with Wedbush Securities.

“It’s going to migrate back to cable with one subscription. That’s what we all really want,” Pachter said.

Because juggling all those subscriptions and passwords cuts into binge-watching time, and the subscription costs can add up.