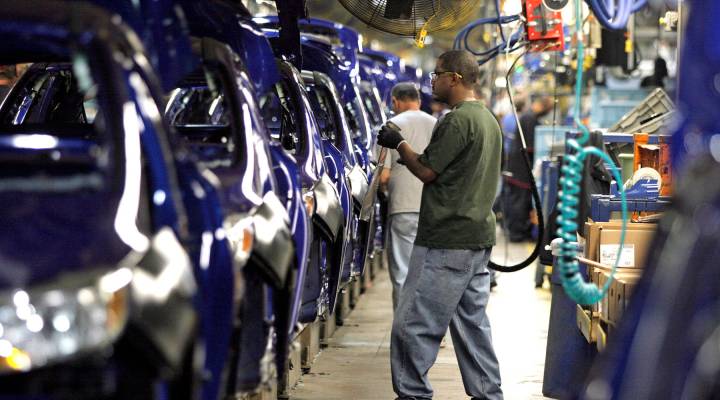 For generations of Americans, the manufacturing sector has been the gateway to the middle class. That idea persists today, even as that gate has been closing for years.

Take Ford Motor Company, for example. Like other car makers, Ford has been through some rough times, but is now riding high amid decreased costs, increased sales and a sexy new product with the new aluminum F-150 trucks.

All this should be good news for the middle class, but many auto-industry jobs still aren’t delivering on the wage front.

Darryl Steele takes his morning coffee in the midafternoon. That’s the time he stops by a Tim Hortons restaurant before heading out for the night shift at Ford’s River Rouge assembly plant, in Dearborn, Michigan.

“I swing a hammer and a chisel, and I also carry a bar,” Steele says. He works as a body-shop fitter, attaching doors and hoods to the new Ford trucks.

“It’s the type of job where  you have to learn how to finesse that job, and sometimes you forget and so you feel it at the end of the day,” he says as he sips his coffee.

Since Steele has been with Ford since 2000, he’s what they call a “legacy employee,” exempt from wage and benefit cuts the United Auto Workers accepted following the 2010 auto crisis.

With an hourly wage north of $25 per hour, Steele says he and his co-workers are far from wealthy, and many haven’t seen a pay increase in over 10 years.

“Basically it’s a job where you make enough money to support a normal-sized family, maybe have a nice house, possibly save money – it’s basically a middle-class job,” Steele says.

Legacy employees are a shrinking majority in the auto industry. New hires making the so-called “tier two” wage are paid considerably less than previous generations, all while Ford is bringing in billions of dollars in profits.

But Ford says these profits are making it back into the pockets of workers.

“You know, we’ve shared a lot of that profit growth with our employees,” says Joe Hinrichs, Ford’s President of the Americas. “The last couple years our employees have had record profit-sharing checks, last year averaging $8,000 for all our UAW employees.”

Hinrichs maintains that the tier-two wage is directly responsible for a hiring boom of 14,000 U.S. workers since 2011.

“A big portion of the new employees have been an insourcing of work, based on the competitiveness of the entry-level wage,” he says. “So, we don’t want to lose sight of the benefits collectively that the UAW and Ford have had from that.”

Hinrichs says even at the lower starting wage, around $16 per hour, there is still a path forward for workers, including profit sharing and a 401(k) retirement plan.

“So, it’s like ‘Ride this merry-go-round long enough, and you’ll get the golden ring,’” says Kristin Dziczek with the Center for Automotive Research.

Dziczek agrees that without the UAW’s wage concessions, many of these new Ford jobs wouldn’t be there. But in the future, companies like Ford, GM and Chrysler will face much more competition for workers from other sectors.

Even at the lower wage, many employees at Ford are simply glad to have a job, especially one with union representation and good benefits.

“There’s not many jobs starting off at the $15 and change per hour that they have at Ford or across the big three,” says Jermaine Harris.

At 6-foot-9 and 400 pounds, it’s as if Harris was born for a manufacturing job. In 2012, he started at Ford, where he runs a hoist dropping engines into Ford Focuses and the new C-Max cars. Like him, many of his co-workers came in on the lower tier-two wage.

“I work on a line that has 23 people on it,” says Harris. “Three of them are legacy workers, and 20 are entry level. Each one of them have families, a couple of them are single mothers, a couple people that are in their 50s that are starting over.”

Growing up, Harris says he saw entire families that were supported by a job like the one he has now. He holds down another part-time job to make ends meet.

“I would love to just get by on the one job. I mean, basically I work every day. You know, I have a 2-year-old, I’d like to spend more time with him,” Harris says.

The UAW says improving the lot of workers like Harris will be a key part of next year’s contract negotiations with the Detroit Three. As UAW ranks swell with more tier-two workers, their votes will be increasingly necessary to ratify any new contract. While Harris says he’s happy to have his job, he will vote against any contract that doesn’t do something for entry-level workers.