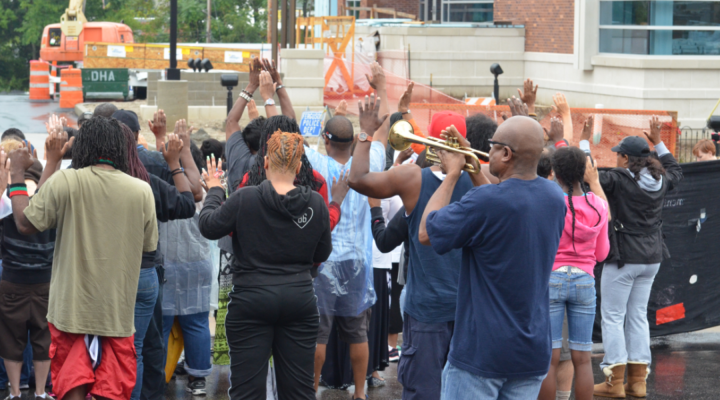 The emotional and economic toll on Ferguson, Missouri

COPY
Demonstrations in downtown Ferguson in a parking lot across from the Ferguson, Missouri Police Station. Noel King/Lindsay Thomas

The emotional and economic toll on Ferguson, Missouri

Demonstrations in downtown Ferguson in a parking lot across from the Ferguson, Missouri Police Station. Noel King/Lindsay Thomas
Listen Now

When the man with the trumpet finished his rendition of “My Country ‘Tis of Thee,” he lowered his head and raised his arms in a gesture that everyone here — and across the country — now realizes means: “don’t shoot.” The posture matched that of others in the crowd of demonstrators that gather daily in a parking lot across from the Ferguson, Missouri Police Station.

Despite the rain, about a hundred of them turned out for a prayer vigil on Saturday, eyes closed, heads lowered, arms raised.

The demonstrations in this part of historic downtown Ferguson have been peaceful. Traffic flows normally, punctuated by occasional bursts of sound from the car horns of passing drivers honking to show support. The weekend farmers’ market is open, and bustling.

The city has made efforts to attract new businesses to this part of town, and the efforts seem to be paying off. South Florissant Street boasts a new wine bar, a bike shop, and a handful of new restaurants. On the outdoor patio of the Ferguson Brewing Company, diners chatter over their meals.

This economic revival, however, doesn’t define Ferguson. Like a lot of cities across the U.S., it also has neighborhoods presently experiencing little or no financial investment. Here, those areas have been characterized by different types of protests.

Less than two miles away, not far from where Michael Brown was killed, there are more demonstrations taking place outside of a QuikTrip convenience store that was gutted by fire when looting erupted.

Traffic is thick, business owners are boarding up their windows, and those in attendance seem to want something other than prayer: they want to be heard.

23-year-old Jamieko Rich, a friend of Michael Brown’s, is clutching a pack of skinny cigars, the item the Ferguson Police Department said Brown stole from a convenience store, making him a robbery suspect. The timing of that announcement and the deep well of mistrust between people here and the authorities, has made many suspicious.

“His life was worth more than this,” Rich said. “He still didn’t deserve to get shot. It don’t matter if he stole a million of these [cigarillos]. His life wasn’t worth it.”

The unrest has disrupted life in this part of Ferguson. Protesters and police have clashed in the evenings, sometimes violently. Residents charge the authorities with disproportionate use of force. This weekend, Missouri Governor Jay Nixon ordered a night-time curfew to be put in place, and many businesses closed early.

Rich, who works three jobs, says he’s lost shifts at the nearby McDonald’s since the unrest started.

“The day before yesterday, the police stormed in there while I was on the clock and told everybody we had a minute to get the [expletive] out of there,” Rich said. “The manager told everybody, ‘clock out.’”

He’s lost money, but what’s more, the situation has reinforced his belief that the police here don’t value the lives of young, Black men like him.

“They value dogs way more than they value us,” Rich said. “We’re a level beneath the dogs to them. I really believe that.”

He wants better from the police, not just because he’s a part of this community, but because their salaries are funded by taxpayer dollars.