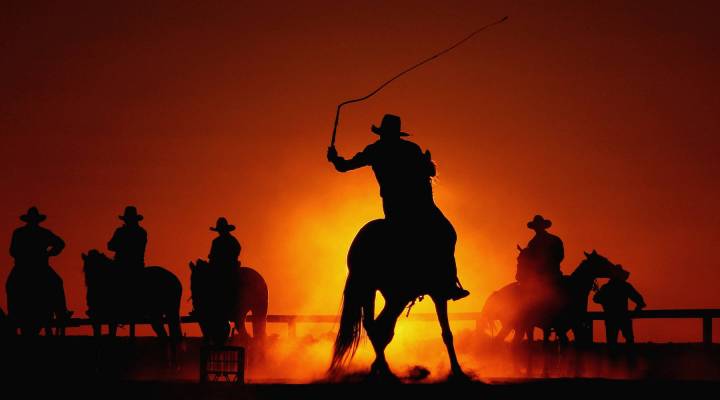 Why buying Bitcoin is like stepping into the Wild West

The CFPB likens investing in Bitcoin and other virtual currencies to the Wild West. Quinn Rooney/Getty Images
Marketplace Whiteboard®

Why buying Bitcoin is like stepping into the Wild West

The CFPB likens investing in Bitcoin and other virtual currencies to the Wild West. Quinn Rooney/Getty Images

It’s green lights and blue skies for Bitcoin, baby! The government’s attitude seems to be laissez-faire, states are giving it the thumbs-up, the Fed is shrugging its shoulders and saying it has no jurisdiction.

Which is why the CFPB’s recent memo of Bitcoin is such a buzzkill.

The Consumer Financial Protection Bureau – I know, it even sounds like the nanny state – “We’re here to protect you from your own poor financial decisions…” (whatever) – the CFPB says that using Bitcoin and other virtual currencies is like “stepping into the Wild West.”

CFPB head Richard Cordray probably should have added, “and not in a good way” to that statement, because I’m pretty certain that most Americans would say that “stepping into the Wild West” would actually be totally cool (ten gallon hat, anyone? Fringed hide jacket? … Leather chaps?).

But several economists say that Cordray is right on the money (as it were). Virtual currencies look very similar to the money issued by banks during the Wild West, they say.

So, the Wild West – Buffalo Bill and Jesse James? Seriously?

Exactly. The Wild West is both a geographical designation and a period in time. It’s a romantic name for the American western frontier, created as America expanded in the latter half of the 19th century (1850-1900). In 1850, most of the area west of Arkansas, Missouri and Illinois was still unsettled, with the exception of Texas, and the rapid expansion across those lands to the Pacific Ocean over the next 30 years was something of a lawless land rush.

Did they even have a banking system back then?

Not at first. Congress made several attempts to create a national bank between 1781 and 1836, but without much success. It didn’t help that Andrew Jackson, who was president in 1836, believed that central banks were the spawn of the devil, pretty much, and only gold and silver should be used as currency. Boy, he would have hated Bitcoin.

So, what did they have?

Basically, from 1836 until 1865, they had a free for all. It was actually called the Free Banking period, and pretty much anyone could open and run a bank, so long as you had a certain amount of capital, a security deposit to back any note issuance, and enough silver or gold or whatever on hand to convert a banknote into that metal on demand.

No wonder Butch and Sundance went into the bank robbery business!

That’s right, hoss. Unlike banks today in the U.S., banks in the Wild West had to keep a fair amount of precious metal in their vaults. If they had vaults, that is. And many did not.

It was. Not only was there a risk that your bank might get robbed and you’d have to wait a long time to swap your banknotes for gold, there was also the danger that your bank might run out of precious metal because all your neighbors wanted to exchange their notes at the same time. And then there were the wildcats.

Yeah. Wildcat bankers were people who set up banks, often in remote areas “where the wildcats roam,” and then issued notes to the public without ever having any intention of paying them back. These scumbags would then skip town and leave the poor townspeople with a bunch of worthless scrip.

There are some crazy stories of bank fraud from way back then, including bankers displaying boxes of nails and broken glass and claiming they were full of silver dollars to gull the unsuspecting locals.

I bet those guys went to jail.

When they were caught, yes they did.

OK, so how is all of this similar to Bitcoin?

Anyone can set up an electronic currency company, and there are right now no regulations covering these ventures. Anyone can buy Bitcoin or Dogecoin or whatever, and anyone can accept payment in those currencies. Regulatory organizations are signaling their concerns, but so far they’re keeping their hands off. Then there’s the rhetoric that proponents of electronic currencies like to use. It reads a lot like the libertarian rationale behind the Free Banking reforms, which were conceived in part as an escape from a corrupt system dominated by special interests (doesn’t that sound familiar?).

So are virtual currency companies the new Wildcat banks?

Not necessarily. Most virtual currencies appear to have been set up for ethical reasons, and their founders and supporters want them to succeed. But that doesn’t mean they’re safe. If you are a Bitcoin user, you should be every bit as concerned as someone who put his money in an independent bank in 1850. The CFPB notes that virtual currencies are not backed by any government or central bank. This means that is those companies fail, you may not get your money back, you will have no recourse to a regulator, and there is no government organization that has insured your money with that company. If the company goes down, in other words, the chances are that your money will go with it.

What about bank robbers?

They may not wear Stetsons and bandannas, and use dynamite and a long fuse, but robbers exist in the virtual world, too. The CFPB says “if a hacker gains access to a consumer’s Bitcoin “private keys,” which are 64-character codes that unlock the consumer’s funds, the consumer can lose all their virtual currency. Fraudsters are also taking advantage of the hype surrounding virtual currencies to pose as Bitcoin exchanges, Bitcoin intermediaries, and Bitcoin traders in an effort to lure consumers to send money, which is then stolen.”

So, step into the Wild West if you wish. But bring a pair of six-shooters. And maybe a getaway horse.