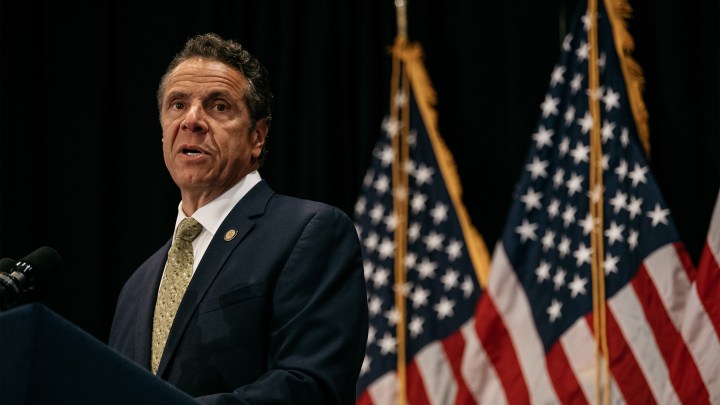 COPY
Gov. Cuomo announced a plan to crack down on fraud with additional oversight of the debt collection industry. Scott Heins/Getty Images

Gov. Cuomo announced a plan to crack down on fraud with additional oversight of the debt collection industry. Scott Heins/Getty Images
Listen Now

This week, the Supreme Court heard arguments in a case involving the Consumer Financial Protection Bureau. The case is about the president’s ability to fire the head of the bureau, with or without cause. Backers of the consumer protection agency fear the decision could virtually unwind the agency altogether.

Now, with the future of the CFPB up in the air, individual states have been stepping up their own consumer protection game. Their target: the debt collection industry.

As part of his latest budget proposal, New York Governor Andrew Cuomo unveiled a plan to crack down on fraud, through additional oversight of the debt collection industry, and a requirement that debt collectors obtain licenses to operate in the state.

New York City-based consumer attorney Subhan Tariq said a licensing system would likely give consumers the option to look up collections agencies, and check on what kinds of debt they collect, or whether the agencies have received any complaints. It’d also give the state the ability to revoke licenses.

“The Bar Association is very strict about complaints that are filed against licensed attorneys,” Tariq said. “So the same would apply, hopefully, to the licensed debt collection industry.”

Consumer advocates say a big component of the licensing proposal would also help consumers figure out whether a debt collections notice is legitimate to begin with.

Robert Nahoum, a consumer attorney, said he often gets calls from people who can’t tell whether a collections notice is real. Nahoum said it’s common for scammers, posing as debt collectors, to contact consumers about fake debts — leaving consumers rattled.

“They get a call from a company saying, ‘hey, you owe us a debt’,” Nahoum said. “And they’re using very heavy handed tactics to try and collect it.”

“If they want to regulate us, for the consumer’s benefit and protection, they’re already doing that on so many levels,” Manghisi said.

The Federal Trade Commission already enforces federal law on debt collection, and the CFPB is working on its own rules to regulate debt collectors.

“[The state] should wait until the CFPB puts out its rules, or it’s going to be either over redundant, it’s going to conflict, because the state and the federal don’t mirror one another, and then we have the city to comply with,” Manghisi said.

The Urban Institute estimates that nearly a third of American adults have at least one debt that is subject to collection. Much of that is medical and student debt. And consumer advocates worry that the CFPB’s proposed rules don’t go far enough to fight predatory practices.

The rules would still allow collectors to send unlimited emails and texts, and place up to seven calls a week per debt.

“If you have three accounts in collection, it’s going to allow up to 21 attempted calls per week, and you can see how that would ramp up very quickly,” said April Kuehnhoff, a staff attorney with the National Consumer Law Center.

Advocates in favor of New York’s proposed licensing rules say states have to step in, given the potential for a weaker CFPB.

“What the New York State Administration is doing is they’re saying, ‘look, the CFPB is failing to supervise, they’re failing to look at these guys very closely’,” said Ira Rheingold, executive director of the National Association of Consumer Advocates. “And there’s a role for states to do that.”

New York isn’t alone. California is out with a proposal to make its own consumer protection department, with backing from Richard Cordray, the CFPB’s first director.