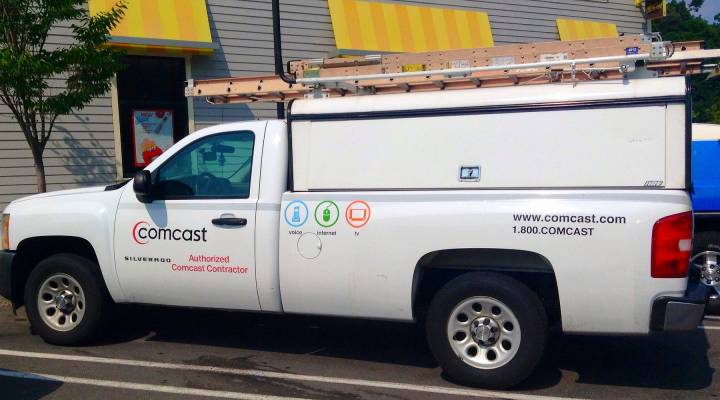 COPY
A Comcast contractor repair pickup. The cable company has been expanding eleigibility for its low-income internet program, which critics allege is mainly to curry the favor of regulators for its merger with Time Warner Cable.  Mike Mozart/Flickr

A Comcast contractor repair pickup. The cable company has been expanding eleigibility for its low-income internet program, which critics allege is mainly to curry the favor of regulators for its merger with Time Warner Cable.  Mike Mozart/Flickr
Listen Now

Comcast is expanding its “Internet Essentials” program, which lets low-income Americans apply to receive broadband internet for ten dollars a month. The move to draw attention to the program has been part of a campaign to convince regulators to approve its merger with Time Warner Cable. Comcast says, if approved, the merger would extend Internet Essentials to millions more low-income people.

Comcast is also announcing is that they’re changing their eligibility requirements so that former customers who still owe payments on their bills will be able to use the program.

“If your bill to Comcast is more than a year old, you will be able to apply for Internet Essentials,” says Brian Fung, technology reporter for the Washington Post.

While Comcast has touted the 1.4 million Americans currently enrolled in the program, critics counter that up to 2.6 million households would be eligible for the program, were it not for the current enrollment criteria — A household is eligible for Internet Essentials if it has a child eligible for free or reduced school lunches.

What the program does make clear, according to Fung, is that there is now an understanding that internet access, especially for poorer families with children, is essential.