Abuse of human growth hormone on the rise in teens

Abuse of human growth hormone on the rise in teens

Use of human growth hormone is on the rise among teens in the U.S., according to a new report from the Partnership for Drug-Free Kids.

Human growth hormone (HGH) occurs naturally in the body and stimulates growth. But in recent years, a synthetic version of HGH been abused by professional athletes to enhance their performance, much like steroids.

While abuse of other drugs is flat or falling, the number of teens who say they’ve used HGH has doubled since 2012, to 11 percent, according to the survey.

But it’s not just teen athletes looking for an edge.

“A lot of kids are very interested in body image,” says Steve Pasierb, president and CEO of the Partnership for Drug-Free Kids. “Young girls want to be lean and toned, young boys want to be muscular and impressive.”

That desire has been met with aggressive marketing efforts for over-the-counter supplements that claim to boost HGH levels in the body.

Because the study is based on teens who self-report using HGH, it’s unclear whether the respondents were using these supplements or injecting the pharmaceutical-grade drug.

Shaun Assael, a senior writer at ESPN and the author of “Steroid Nation,” believes the high cost of the pharmaceutical version would limit its use.

“The idea that [HGH] is being passed around in gym locker rooms, I’m not going to say it never goes on, but I’m highly skeptical of that,” he said.

Either way, the Partnership for Drug-Free Kids finds the data troubling and potentially dangerous for teens, since supplement manufacturers don’t need approval from the Food and Drug Administration before marketing a new product. Rather, it’s the company’s responsibility to make sure the supplements are safe and effective.

However, even if the supplements aren’t dangerous, they are a waste of money, says Chris Cooper, a professor of biochemistry at the University of Essex and the author of the book “Run, Swim, Throw, Cheat.”

“In general, a lot of pills that claim to effect human growth hormone in the body do nothing of the sort,” Cooper says. “Probably they just have a bad effect on your bank balance rather than your health.”

But Cooper cautions that injecting the wrong dose of synthetic HGH or using it without the supervision of a doctor can have much more serious health implications on teens’ growing bodies, including increased risk of diabetes. 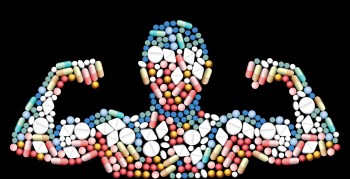